I’ve been searching for a french chest of drawers for a couple months now, and when I found it on craigslist, to be honest, I didn’t even call right away. It was a terrible picture taken, and I could see some damage, and I just wasn’t sure. So I waited a couple weeks. And it was still there. So I finally texted the guy. He actually was kinda weird and told me at first he still had it, then he said he didn’t, and I almost gave up. But then I decided to call him. And good thing, because he may have been a little clueless, but he assured me he still had it for sale. I went them with the whole fam damily and I was so pleased at how solid the piece was and especially the hardware. I could tell the bottom decorative piece below the drawer, was missing so I was able to get it for a VERY good price. 🙂
There was a crack in the drawer front that was repaired (albeit poorly), so I filled in the cracks and bumps with wood filler as best I could, and sanded it smooth. 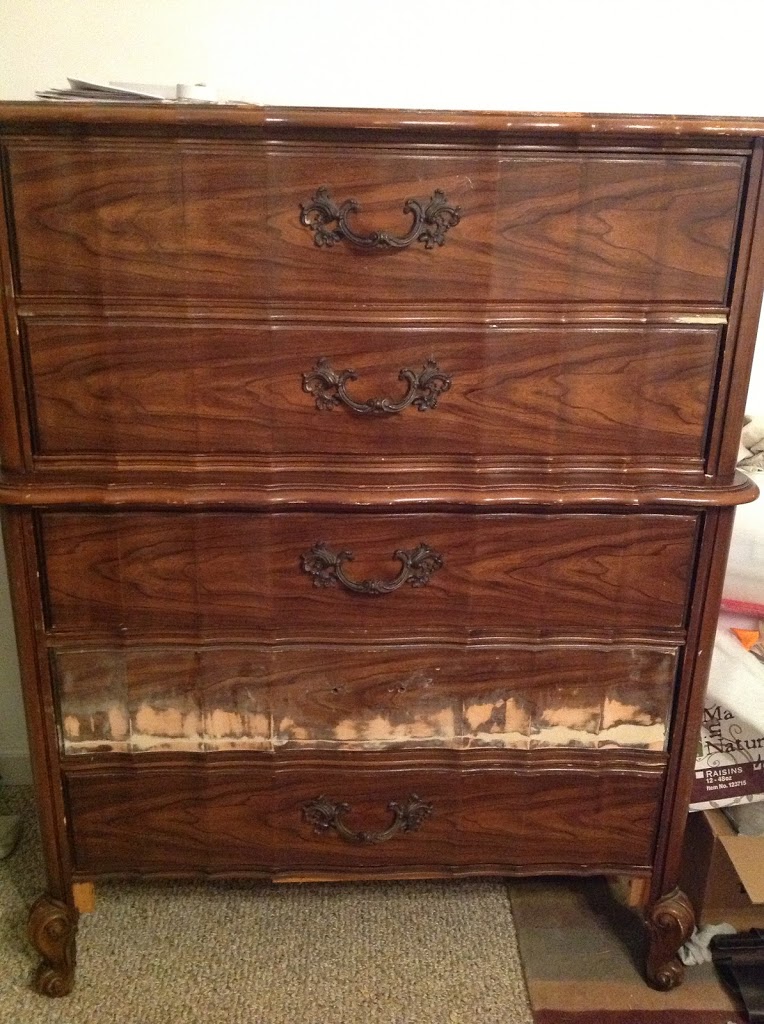 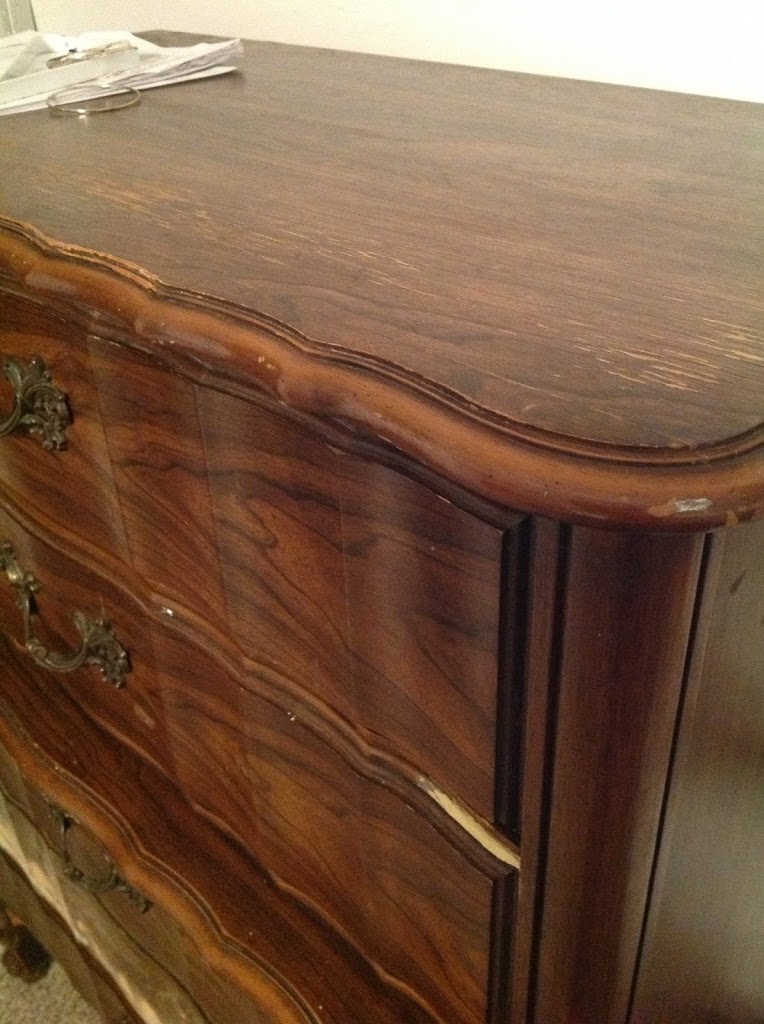 This was a new challenge for me. I had never actually replaced anything decorative. I think I ended up taking 3 trips to Lowe’s for the right piece of wood. What ended up working was a 1/2″ thick piece of pine that was the right length I needed. Then I drew a pattern on a piece of paper of what I wanted the wood to be cut to. Since I wasn’t sure it if was going to work, I didn’t take any pictures of it. All I can say is, I cut out the exact size of the wood, then folded it in half, then drew the curvy design I wanted and cut it out. That way both sides were the same.
I then went to my good friend’s husband, who has band saw and a router, and he cut a curvy edge edge for me then gave it a beveled/routered edge (what is that even called?) After that I bought some pretty wood applique at Lowe’s that matched the design style of the handles.
My friend’s husband is a master woodworker and suggested I use Titebond II Wood Glue, instead of other brands. He says he’s found it to be the strongest. 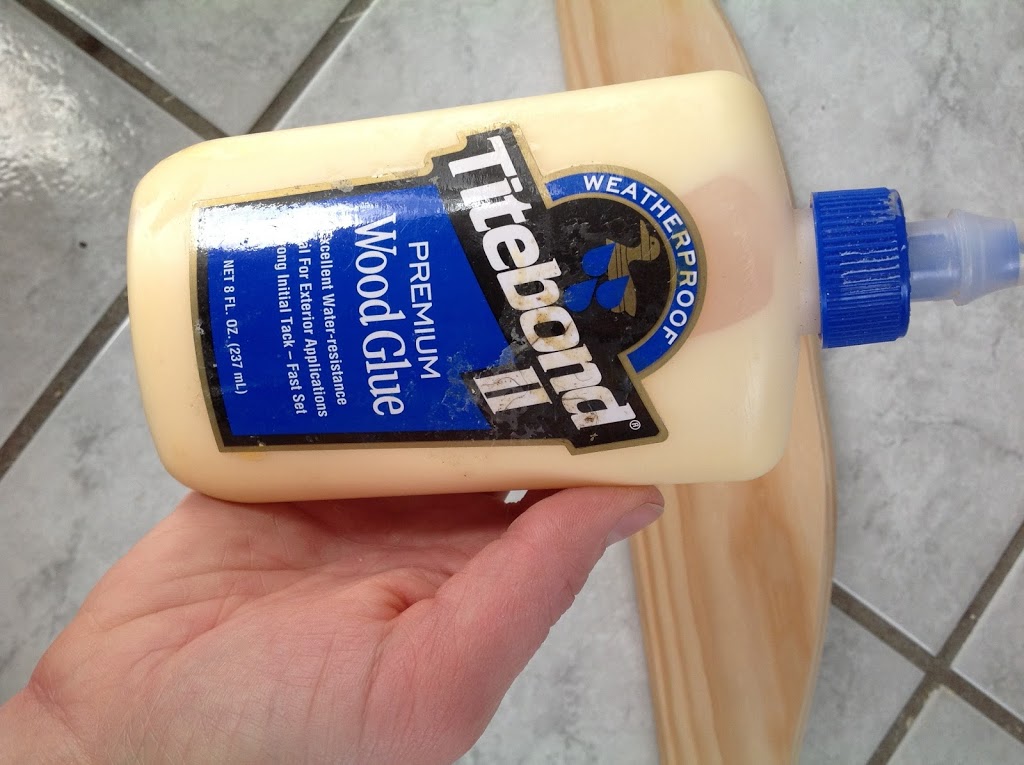 I drew a center line, so I knew where to put the appliques, glued them in place, and clamped and taped them while they dried.

After they dried, I stained them very dark, so when I painted over it and distressed, it would appear dark, matching the rest of the dresser. 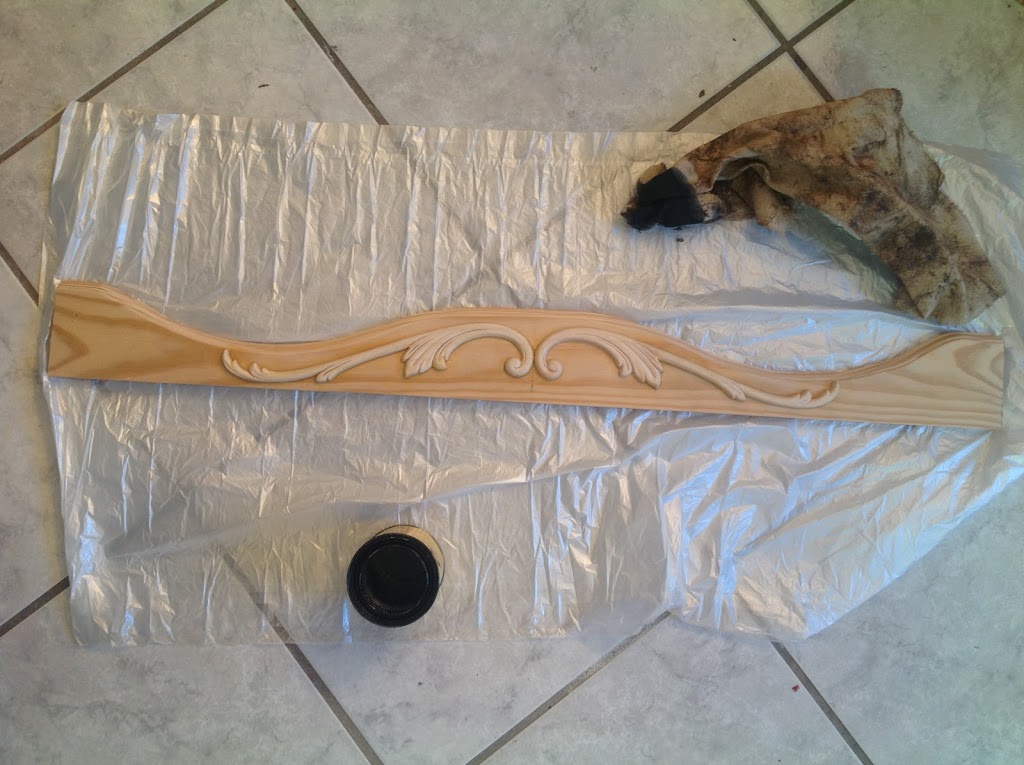 Not pictured is after I stained it, I was worried about the stain bleeding through the white paint, so I gave it a quick coat of wipe on poly and let it dry. Then I painted 2 coats of Old White by Annie Sloan Chalk Paint, just like I did for the rest of the dresser. 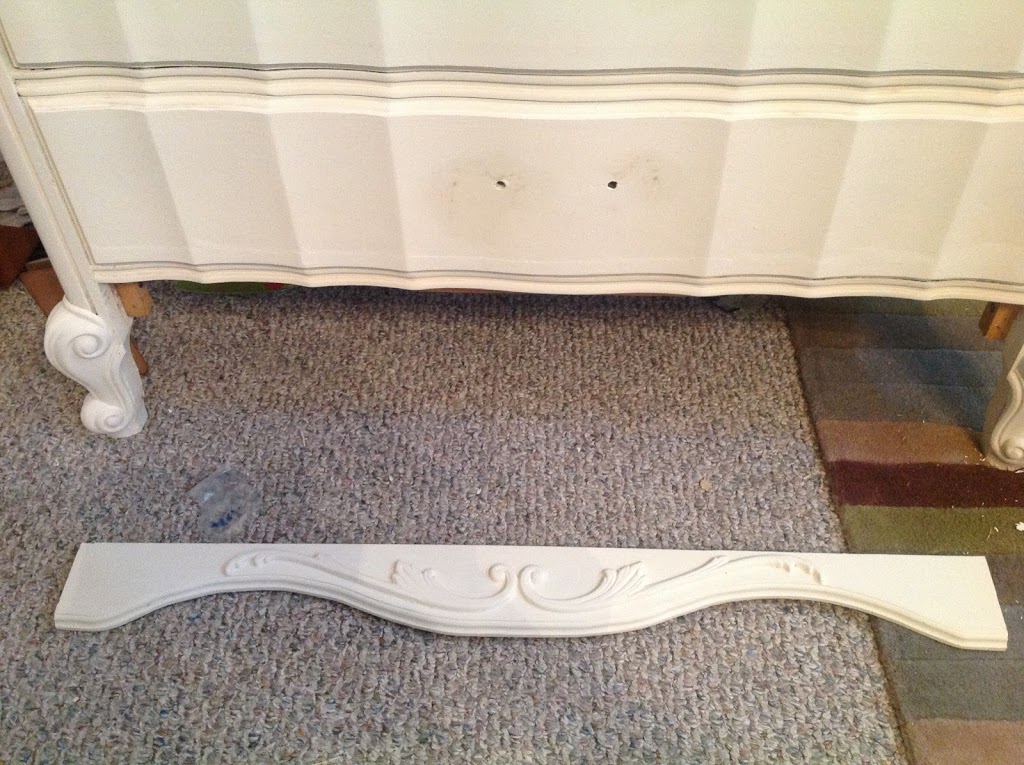 I had to remove the wooden brace pieces and take out the original staples (they were in the way) and then I with glue and a couple small nails I attached the new trim piece into the wooden braces. After that is was just a matter of screwing those wooden braces back into the dresser bottom!

This is what it looks like from the front now! 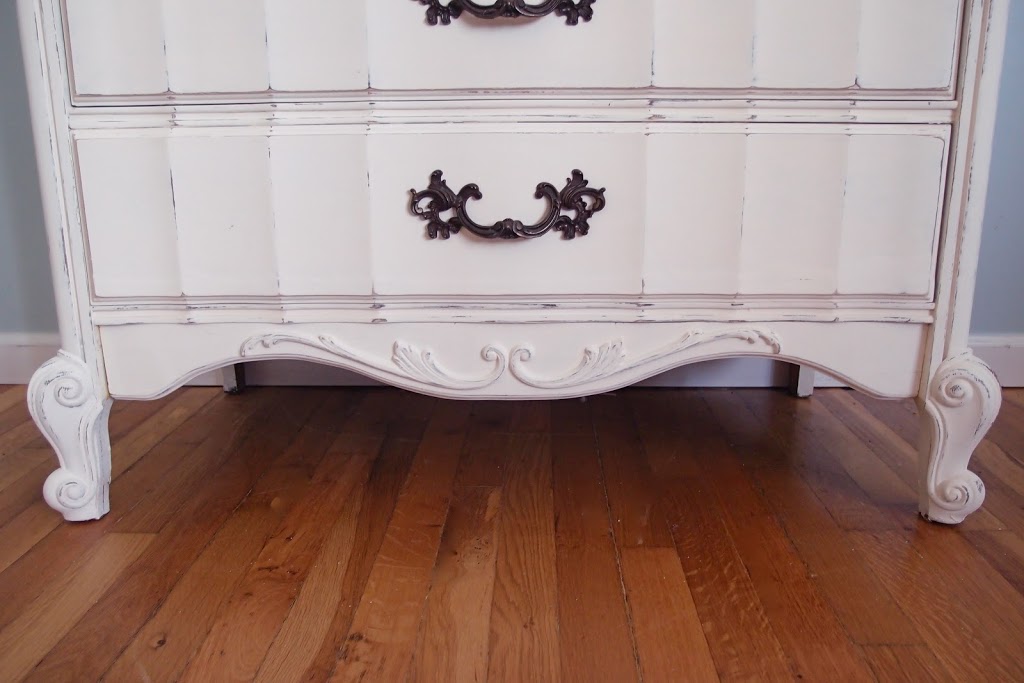 The bottom drawer front is the one that was repaired, and even though you can see still a slight crack if you get close, it’s barely noticeable if you don’t know to look for it! 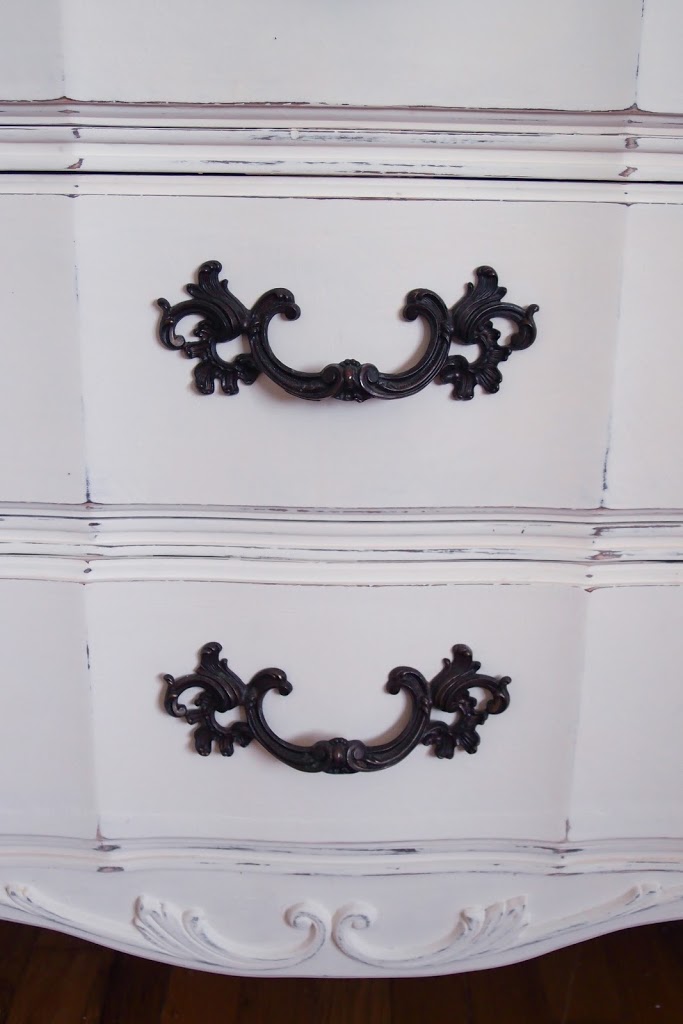 Love these drawer pulls! They are (in my opinion) the best part about this dresser! I left them untouched! 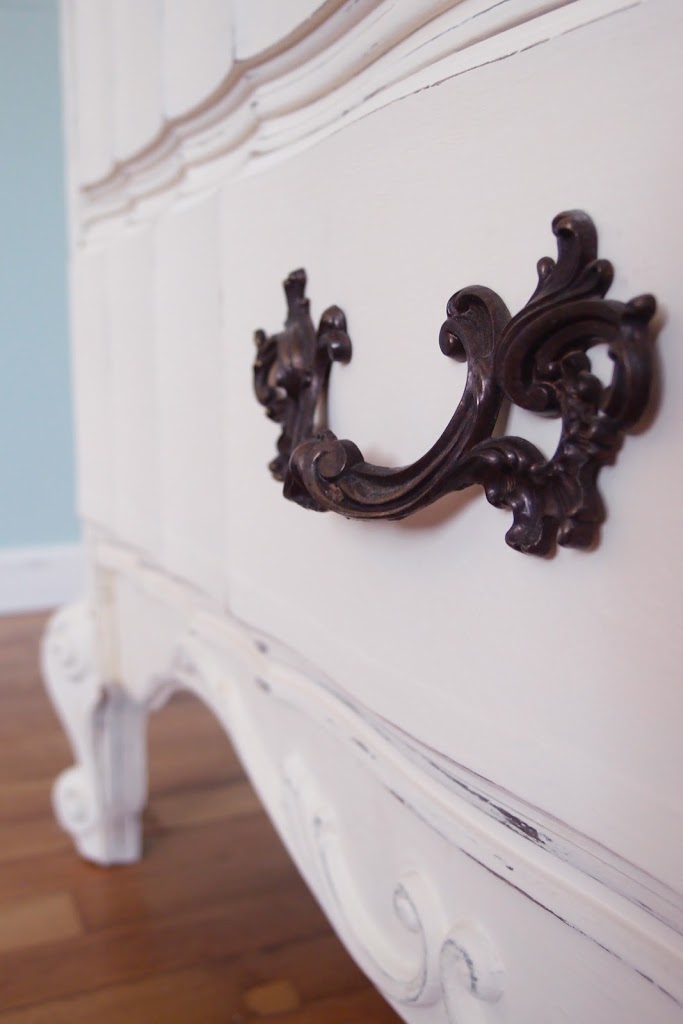 I knew ahead of time I wanted to give a little Valentines theme to the decor for this one. 🙂 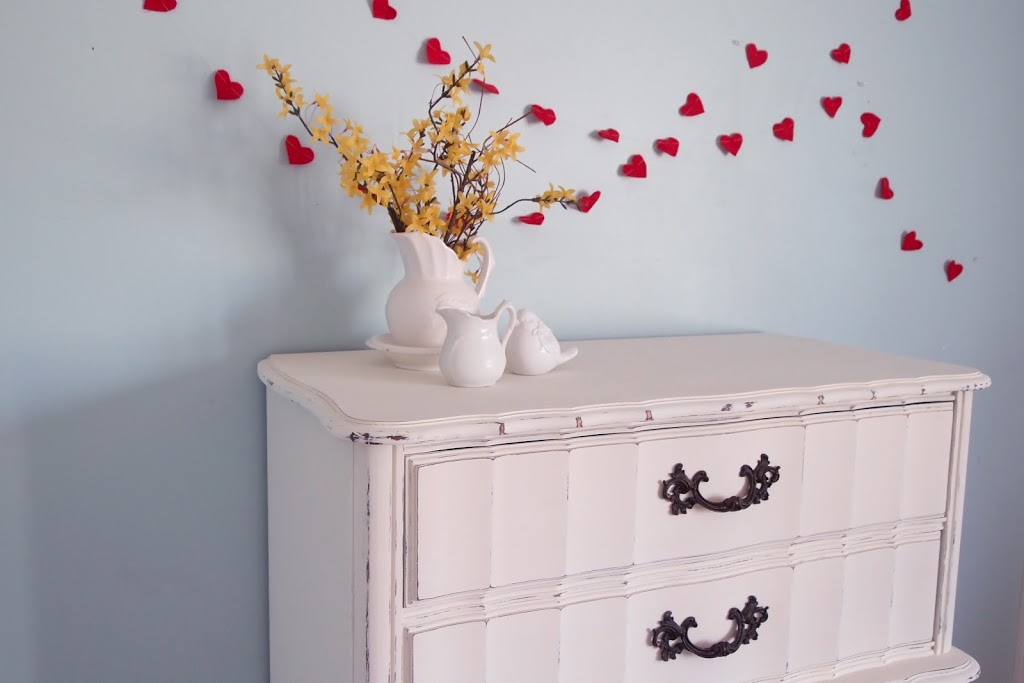 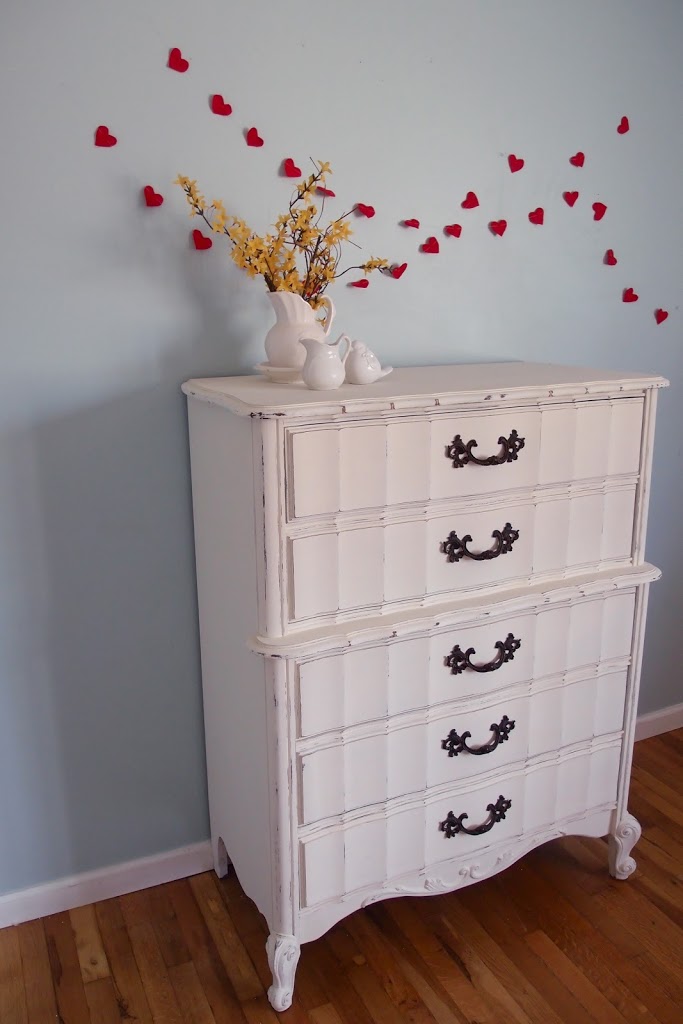 When I distressed it, I used (I think) a 150 sanding sponge because I wanted the worn away areas to be silky smooth and not over-done. 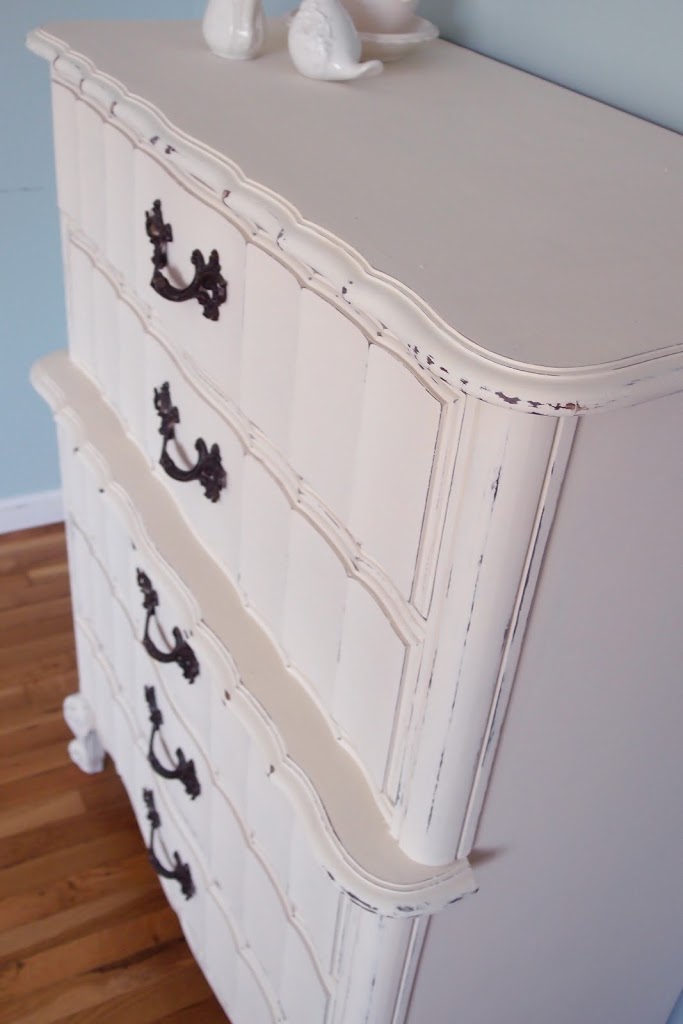 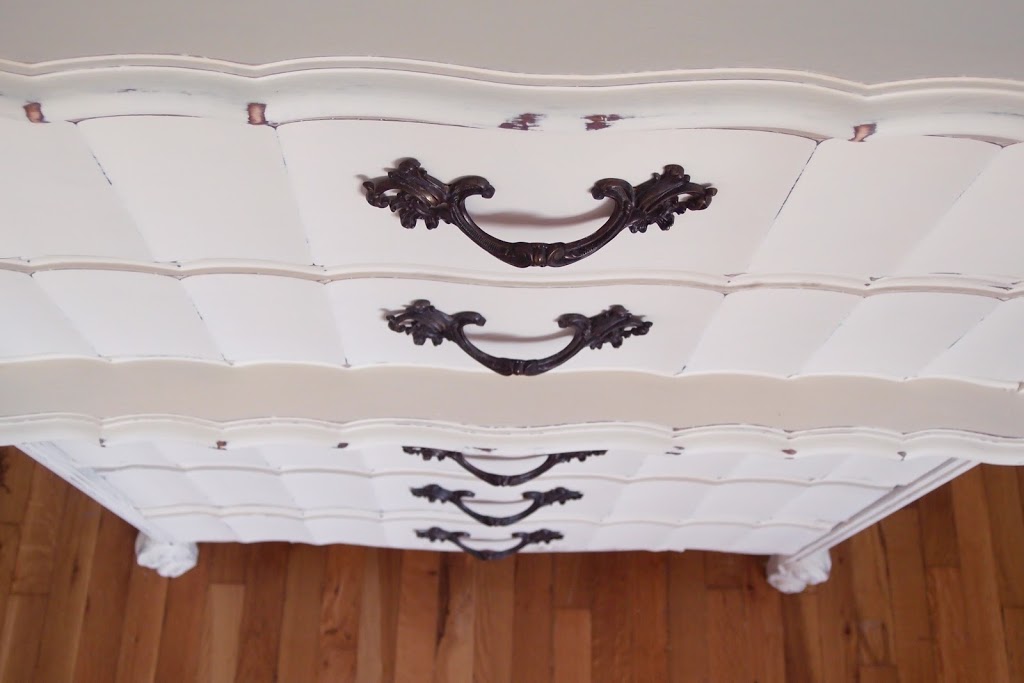 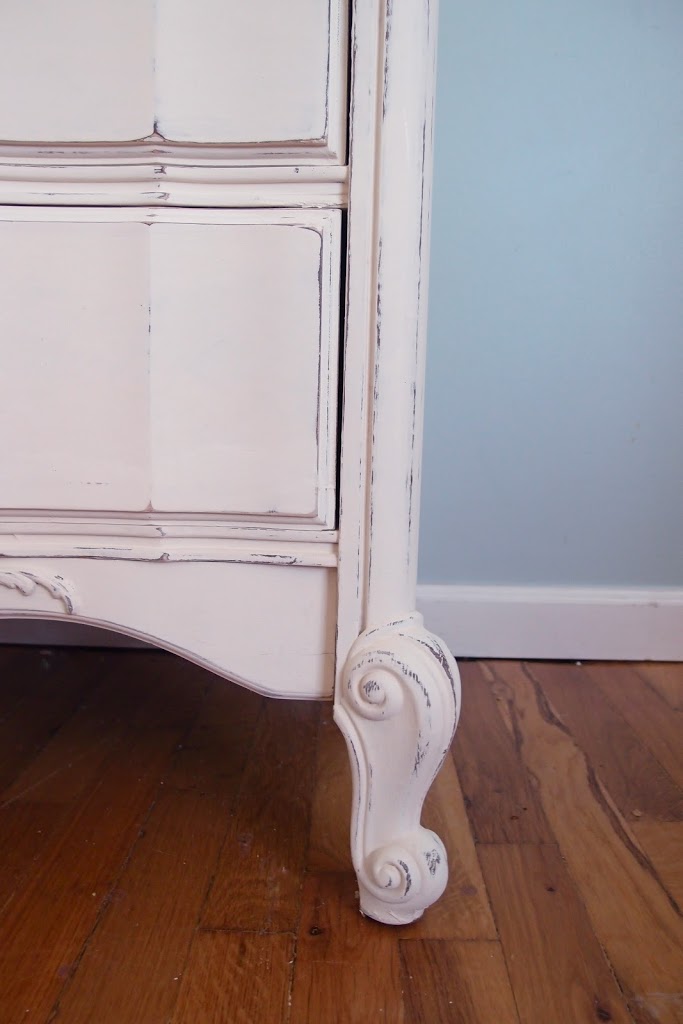 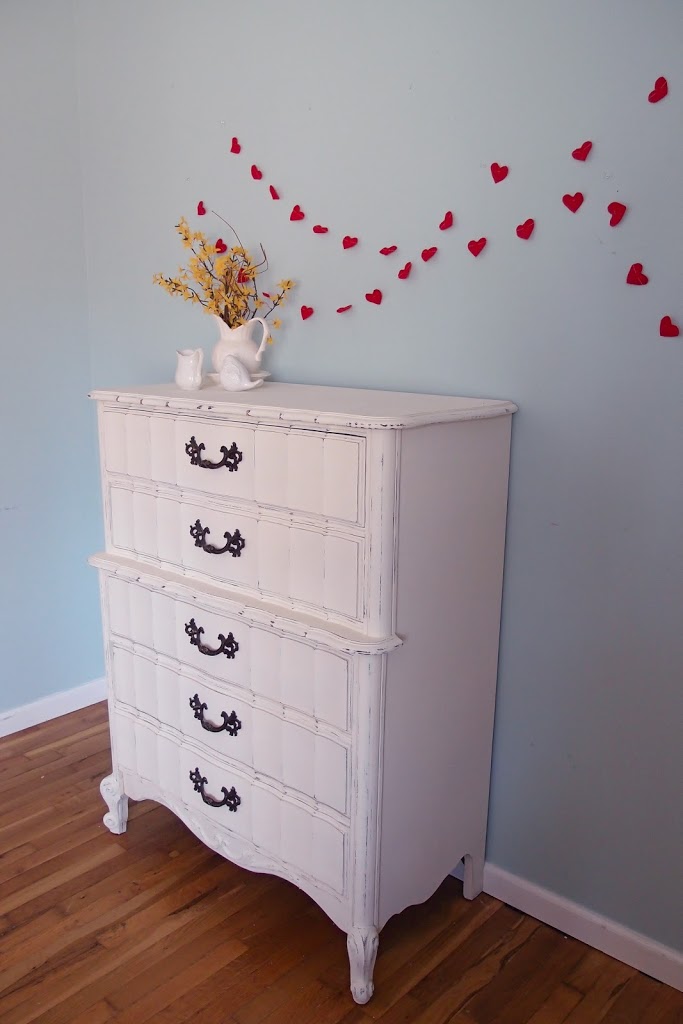 This is truly a shabby chic chest of drawers, and I love it! 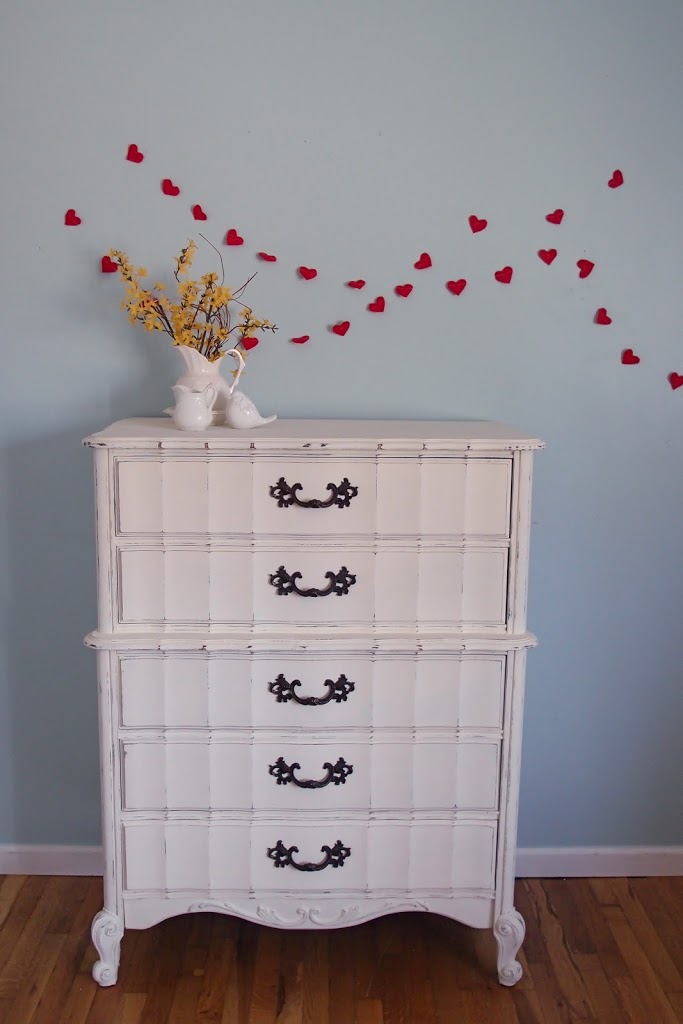 I’m also having a giveaway! 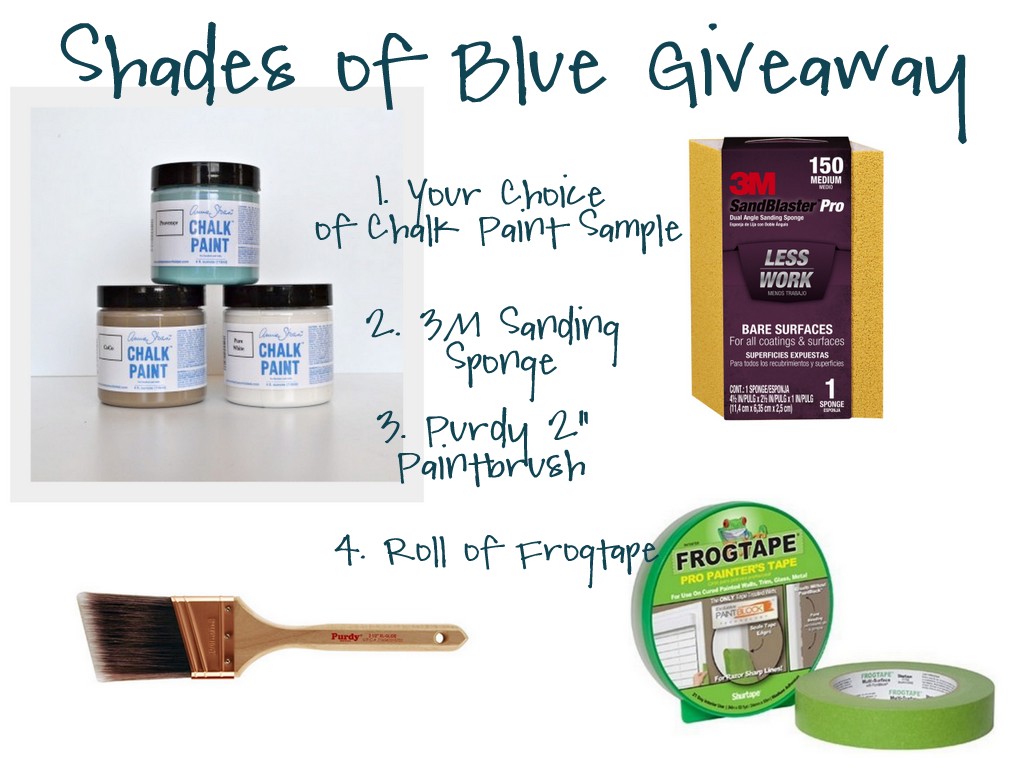 I included the items I love the most when starting a new project and are perfect for the beginner, or so useful for the professional!
There will be 1 winner, which will receive
1. Sample size of Chalk Paint in their choice of color.
2. 3M sanding sponge in 150 grit.
3. Purdy XL- Glide 2″ Paintbrush
4. Roll of Frogtape
Items valued at over $40!
You can enter up to 4 times by doing the following:
1. Follow this blog (if you already follow, comment saying so)
2. Like my page on Facebook (if you like it already, comment saying so)
3. Share this link as your Facebook status
4. Pin it!
Make sure to enter in a comment for each thing you do, so you can comment up to 4 times (for each entry)!
Winner will be selected NEXT THURSDAY, February 21st at 9pm cst, and announced on Friday the 22nd at 12:00pm cst.
Good LUCK!
Linking up to Miss Mustard Seed
Elizabeth & Co.
The Shabby Creek Cottage