Garage Sale season is upon us! Things are starting to warm up for most of us and people are spring cleaning! That means some bargain furniture could be in your near future!
Whether I’m going to garage sales, thrift stores, estate sales, auctions, or craigslist hunting, knowing the different styles of furniture has helped me make better purchases! I KNOW when I’m getting a good deal. I also KNOW when someone is over-pricing a piece. And the reason? I know what to look for! Know the different styles of furniture has helped me a lot!
So, I’ve compiled good examples of each major style of furniture (and some hardware) drawing from some other blogs, but mostly from finished pieces I’ve done. I also offer a description of each, below the picture compilation.
And remember, when you are out and about finding original, solid wood construction of any of the following styles will be worth more. But make sure you take out drawers, open doors, look at the back, do WHATEVER is takes to get a feel for how solid it is. There are plenty of cheap imitations or simply new companies copying an older style.
So, without further ado, not necessarily in chronological order, the first 5 out of 10… 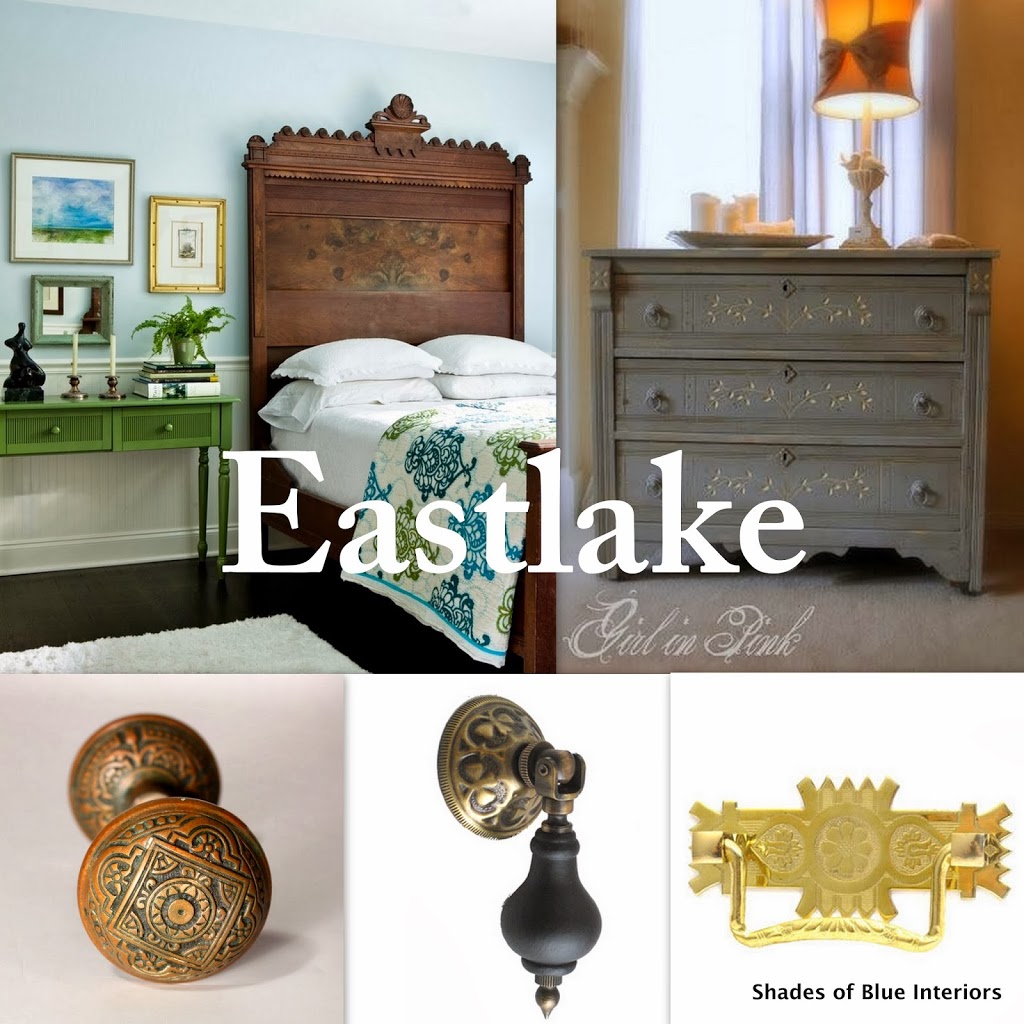 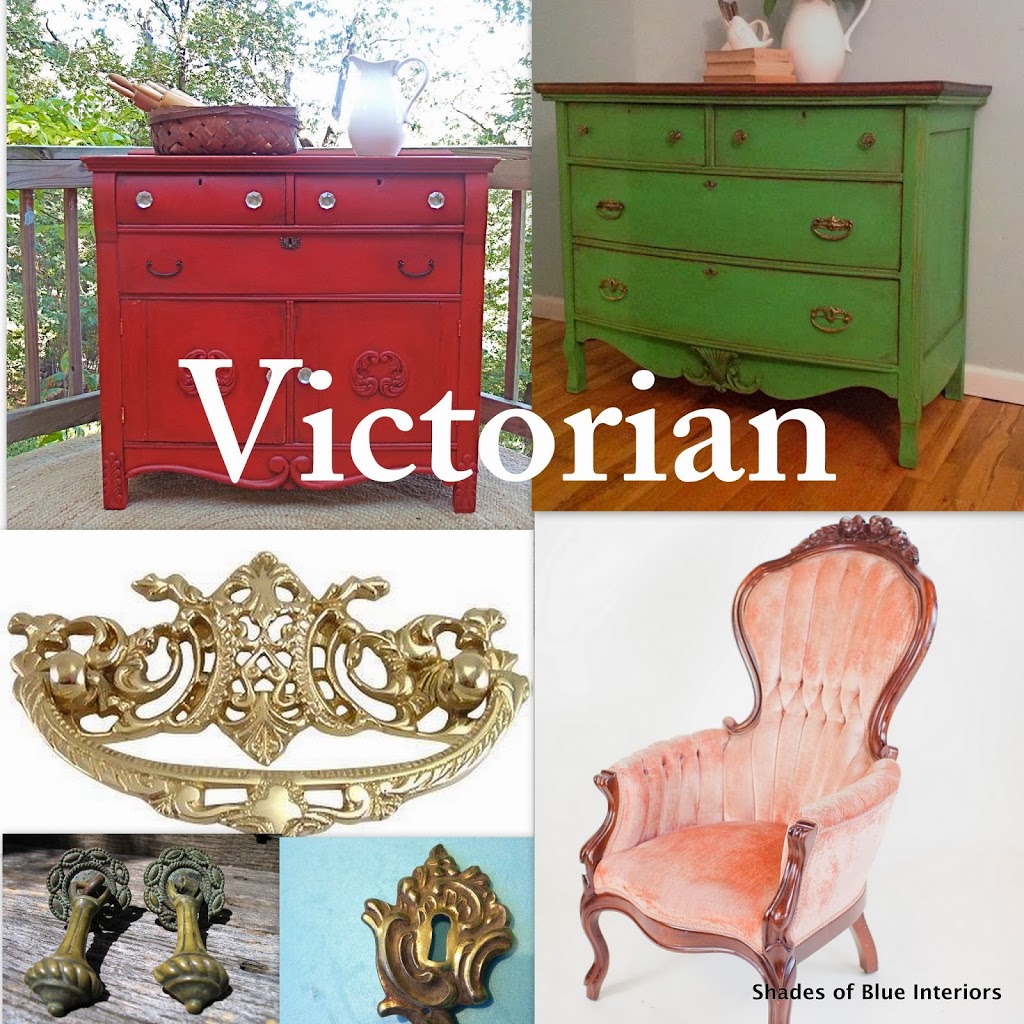 2. Victorian: Ornate scrolls, curls and other details were typical of this style. The jigsaw was invented around the time that this style became really popular in America, so it opened up lots of options for decoration. Often the original hardware mimics the ornate style and was typically polished brass. Fancy escutcheons (keyhole covers) were typical of this style.
Sources: Top Left, Top Right, Middle Center, Bottom Left, Bottom Middle, Bottom Right

3. Queen Ann & Chippendale: Queen Ann-Lots of feminine details (especially the shell motif) and especially the dainty legs set this style apart from the others. Queen Ann style furniture almost ALWAYS has the same shape of legs  (top two pictured above) with that ‘coat of arms’ looking brass pull. Those pulls remained popular when the next style developed… Chippendale- Feminine details from the Queen Ann style remains, but feet became a little bulkier, with the claw foot addition. This style is often called “The Big Brasses” because of the love of the brass pulls. Sometimes a single drawer will have 6 brass pulls.
Sources: Top Left, Top Right, Bottom Left, Bottom Right 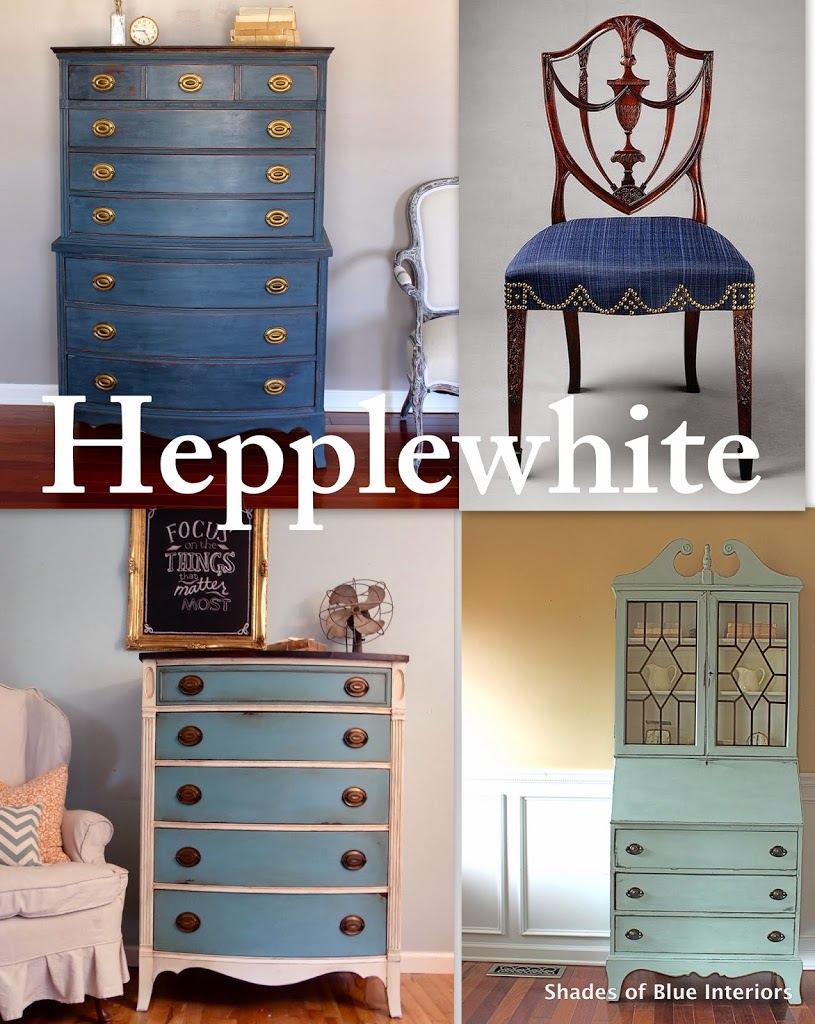 4. Hepplewhite: This style is really the Hepplewhite/Sheraton since they worked together to come up with cleaner, straighter lines in furniture, moving AWAY from the curviness of Queen Ann and Chippendale. Delicate legs, classical features, and most notably, the circular or oval stamped drawer pulls. Shield motif is prominent in chairs.
Sources: Top Left, Top Right, Bottom Left, Bottom Right 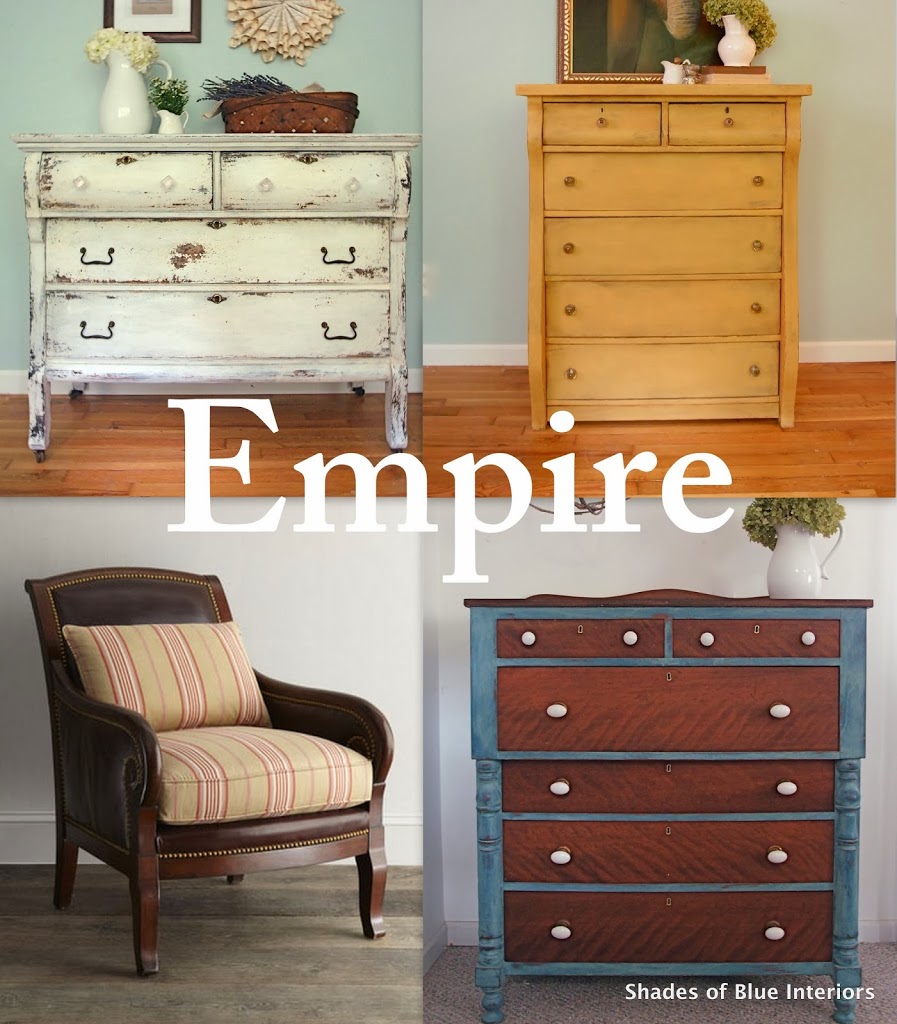 5. Empire: Heavy on top with bulky curved legs is pretty typical of this style. They was based on imperial forms from Egypt, Ancient Greece, and Rome and usually construction is made from hardwoods. Empire dressers have remained popular and sometimes you will find wooden veneers used (which became popular during the depression when it was developed). Round glass knobs were often used for the hardware.
Sources: Top Left, Top Right, Bottom Left, Bottom Right
Come back next Wednesday for part 2, with the remaining 5 styles!