When I signed up for Haven Conference several months ago I was thinking it would be like a Powerbar for my blog: energy-packed with information– both some sugary motivation to make immediate changes and some actual substance that would stay with me to help me learn and grow- long term.
And it was that! But it was so much more! I’ve never made best friends so fast with people I’d never met, face-to-face.
Being a people person, I thrive in social situations. BUT I’m not one of those “hey look at me!” stars of the show. I feel most comfortable being weird in front of just a few people. That way when I mutter ‘that’s what she said’ while you are describing your DIY project (so.many.opportunities.), it won’t get lost in the masses. You want to hear my immature jokes, trust me. 😉 Sometimes it backfires and I spill someone’s champagne down their blouse as I underestimate the circumference of my ‘stir the pot’ dance moves. Not that that happened. Hypothetical, ya know…. smh
I will also, likely, be the first person to slap or pinch your butt that you have known less than an hour. I’m professional like that.
This lady can attest to this fact! Lucy from Craftberry Bush and I shared a car together from the airport to the hotel and we were pretty much inseparable the rest of the weekend. She’s as endearing as she looks, which is a rare quality. 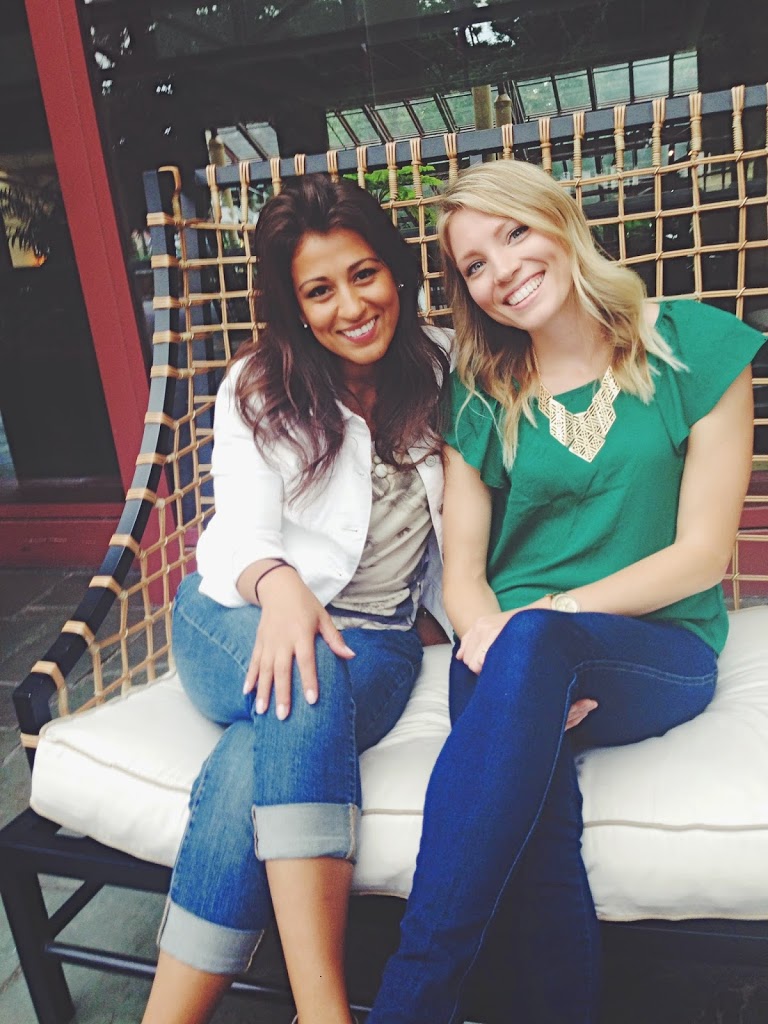 Me, channeling my inner Alison Show… 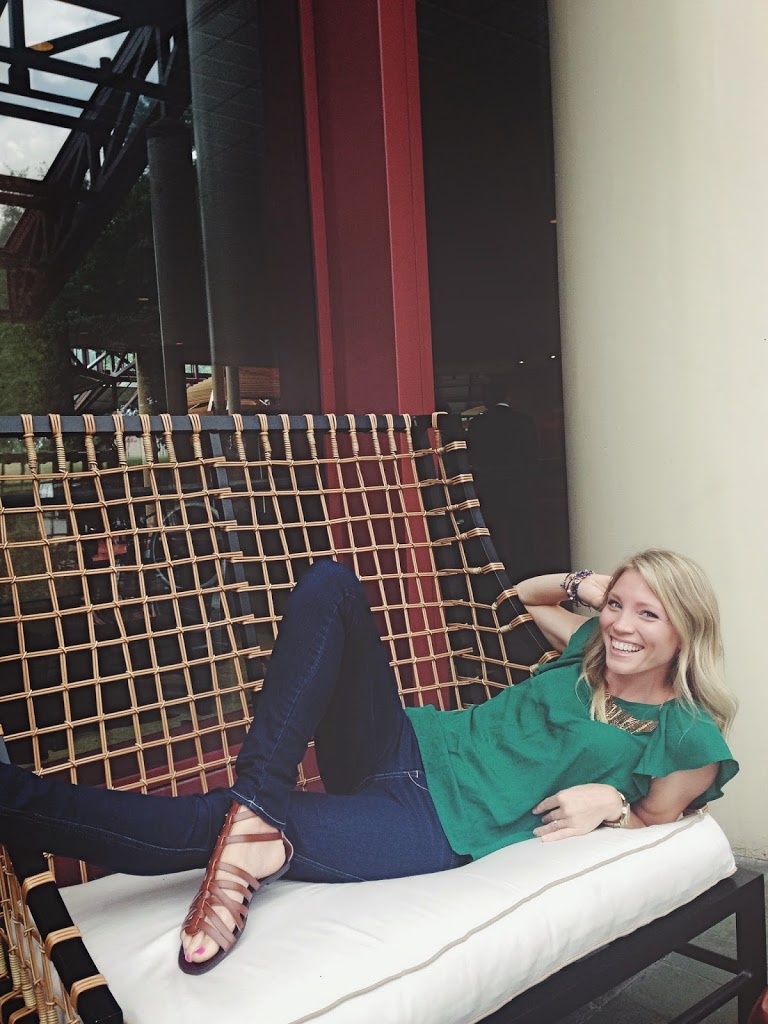 Then my roomie, Danielle from Finding Silver Pennies, showed up and then the party really started! Danielle is the only person on earth that could stay up till 2:30am talking about furniture painting and staining. And we did. Danielle’s creativity and beauty far exceed her petite size. 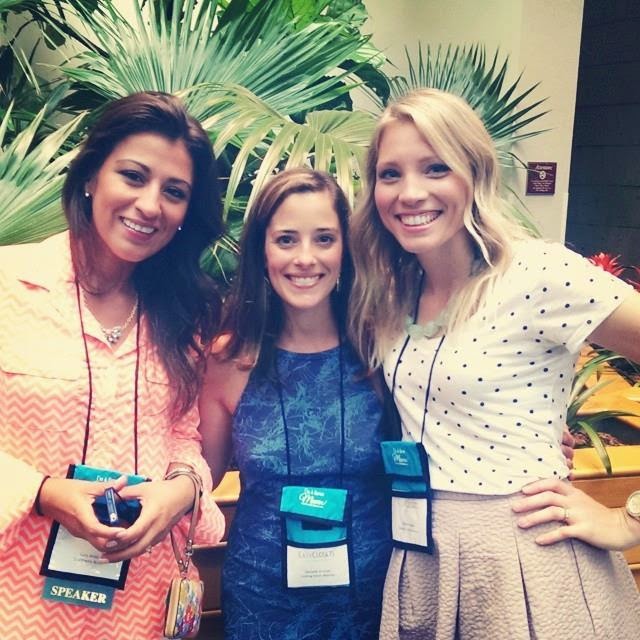 The next morning was the first day of classes. I went to Blogging Trade Secrets: What We Wish We Knew Then taught by several talented women bloggers, including Dusty of All Things G&D, who I got to know a little better later on. It left me feeling a little overwhelmed with how much change I felt I needed/wanted to make. But then I gained a little perspective after talking with Danielle and felt much better. I came to the realization that: My journey is my journey. Do I need to make blogging changes? Absolutely. Do I need to maintain my family priorities? Absolutely. Can I balance them both? I think being around so many amazing  and powerful women this weekend who do both, proves to me that I can… I just need to organize my time better. Doing more of what is good and less of what is … not as good.
Then I did a couple workshops on building a bench and laying tile, and then it was on to my new bestie’s class, Photography Styling: Creating Beautiful Shots– taught by Lucy from Craftberry Bush and Kristin from The Hunted Interior. 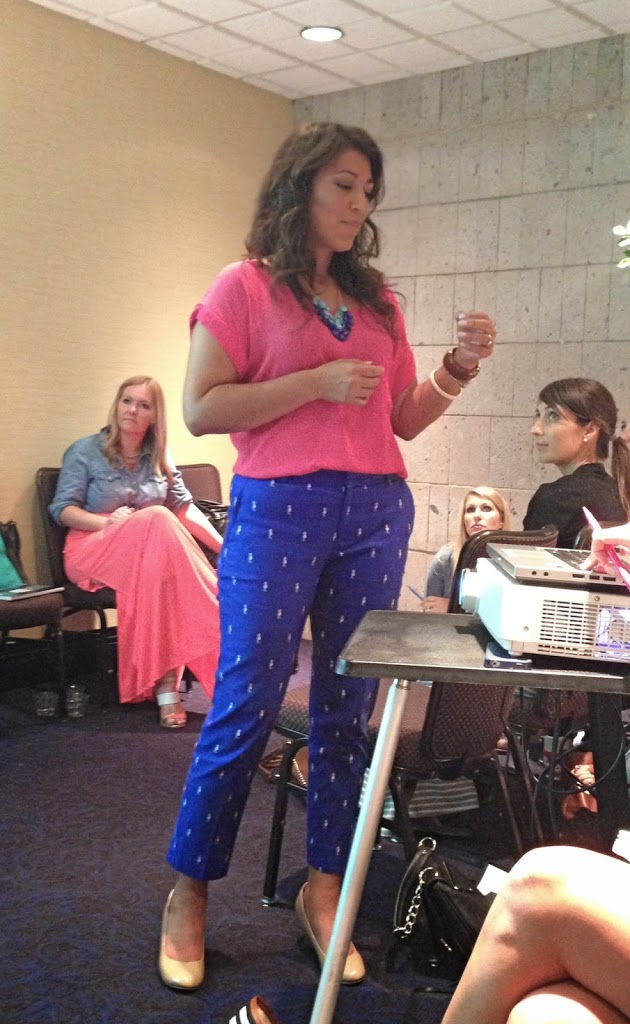 If I had to come up with one sentence for each of their presentations, Kristen’s would be: “Anything for the shot!” and Lucy’s would be “Tell a story!” 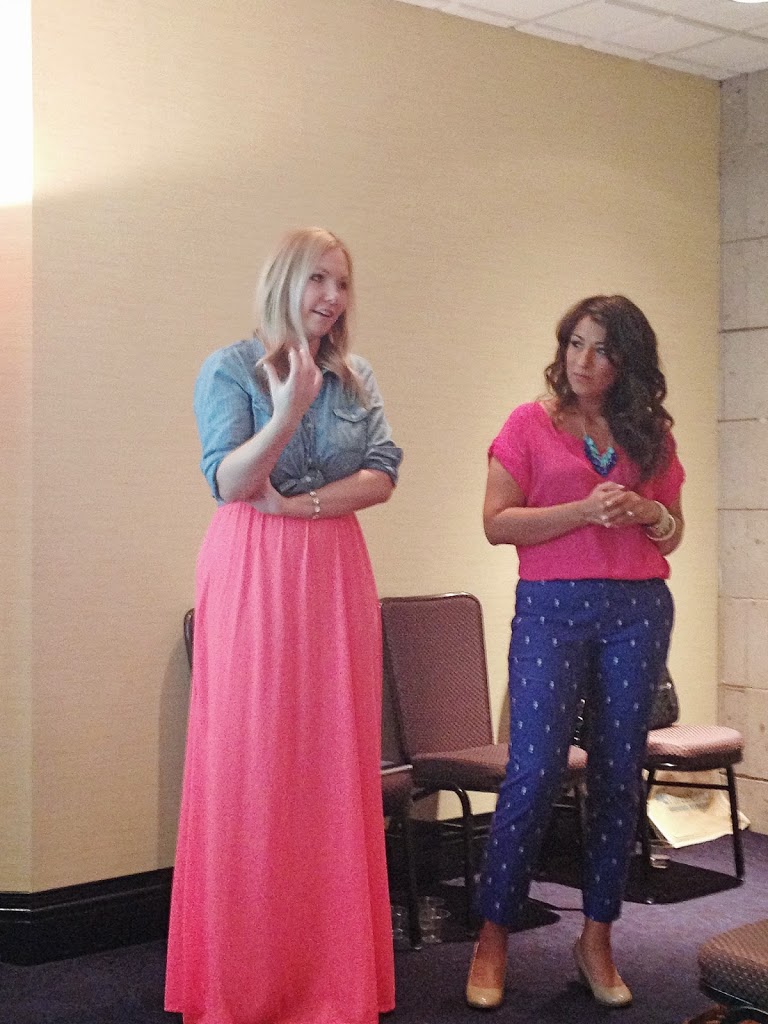 Then it was on to another night of partying! And another outfit change! You guys! When I was 4 or 5, before I was even in school, I remember inviting my best friend over and we would change outfits probably 8-10 times a day. No joke. Anyone in my family can attest to the fact that I’ve loved clothes since I could walk. So pretty much this weekend fulfilled some childhood dreams of having legitimate (or not) excuses to change outfits! And accessories! And shoes! wheeeeeeee!
#calmdown
(KariAnne, that hashtag will be trending before you know it!) 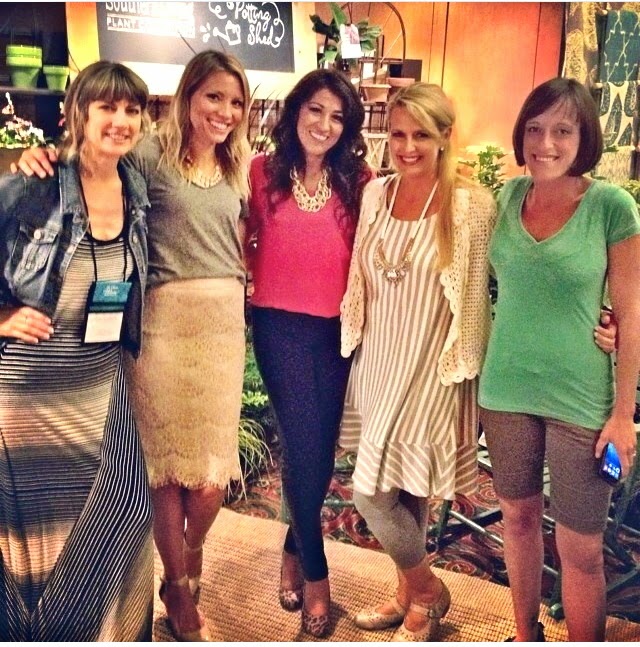 Above pictured on the left is Karen of The Graphics Fairy (!!!), moi, Lucy, Daune (not be be confused with Duane haha ;)) of The Cottage in the Oaks, and Johnnie of Saved by Love Creations.
Then I met the lovely and hilarous Ashley of The Handmade Home. She is kind of a big deal and I was pretty excited to meet her since she was one of the few bloggers I regularly read and follow. 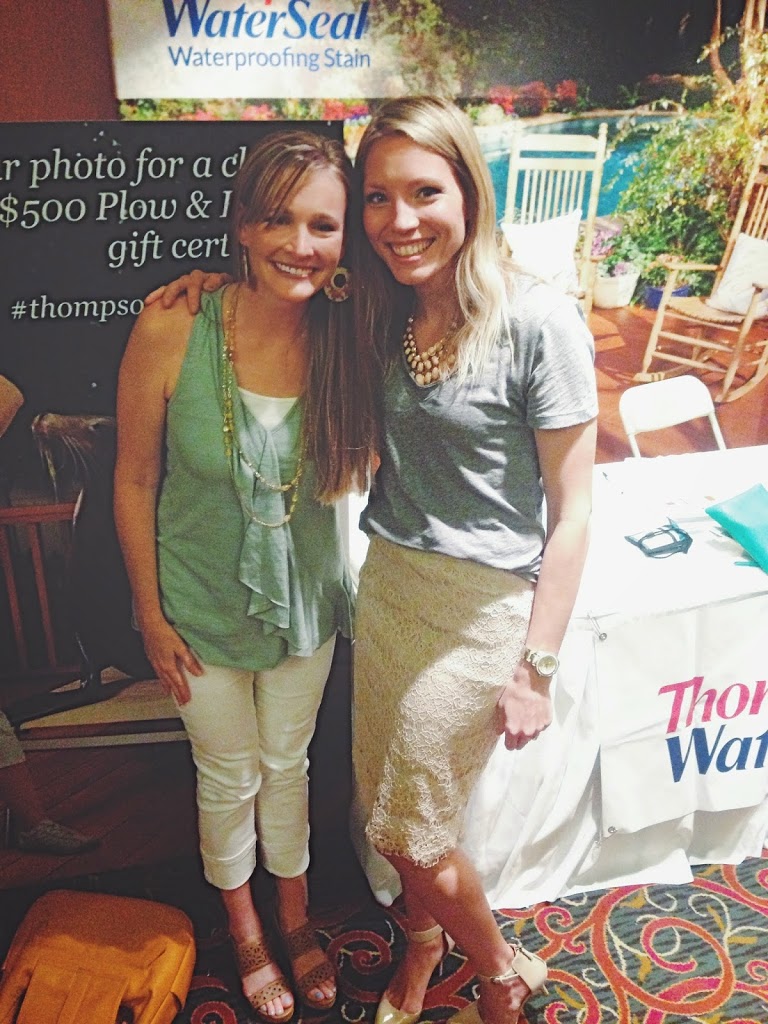 At some point this weekend we had to pose in this little shower to get a free shower head from Waterpik. I was actually trying to look like I was washing my hair, not stretching or airing out my pits… 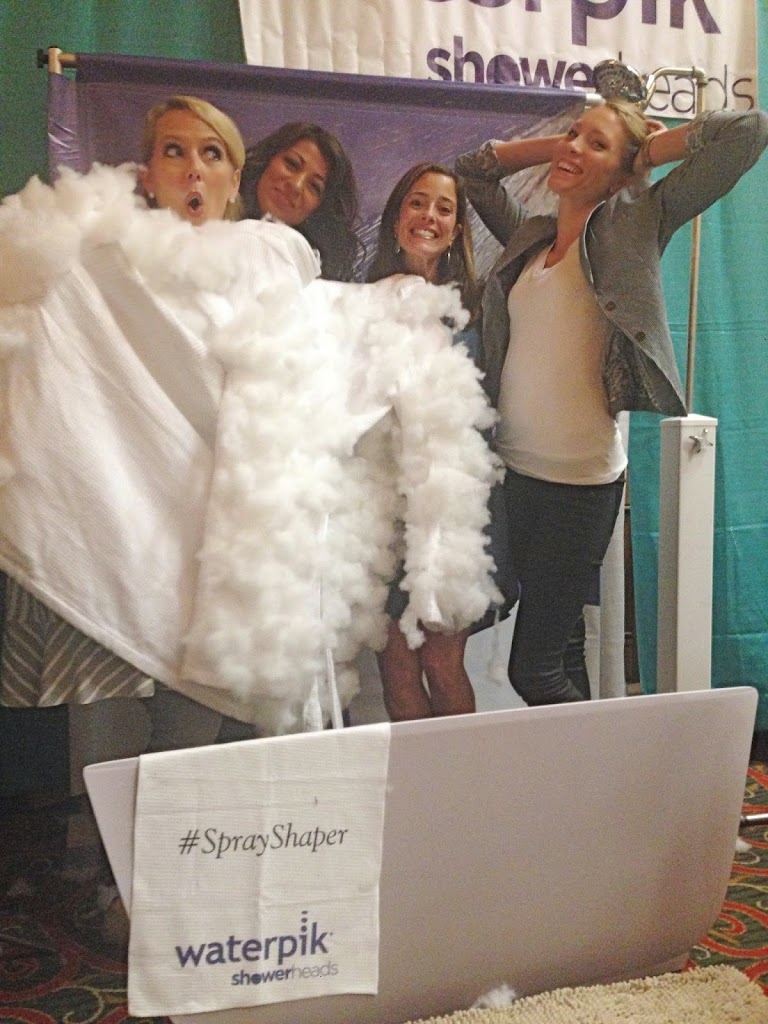 Saturday morning I had every intention of going to another building workshop, but was swayed into going to Anthropologie in the mall across the street with Lucy and Danielle. I love going to different Anthropologies because even though the clothing may be the same or similar, the furniture and displays are always different and incredibly creative. This cabinet had my dying. I am going to use this as inspiration on a future piece. I promise. 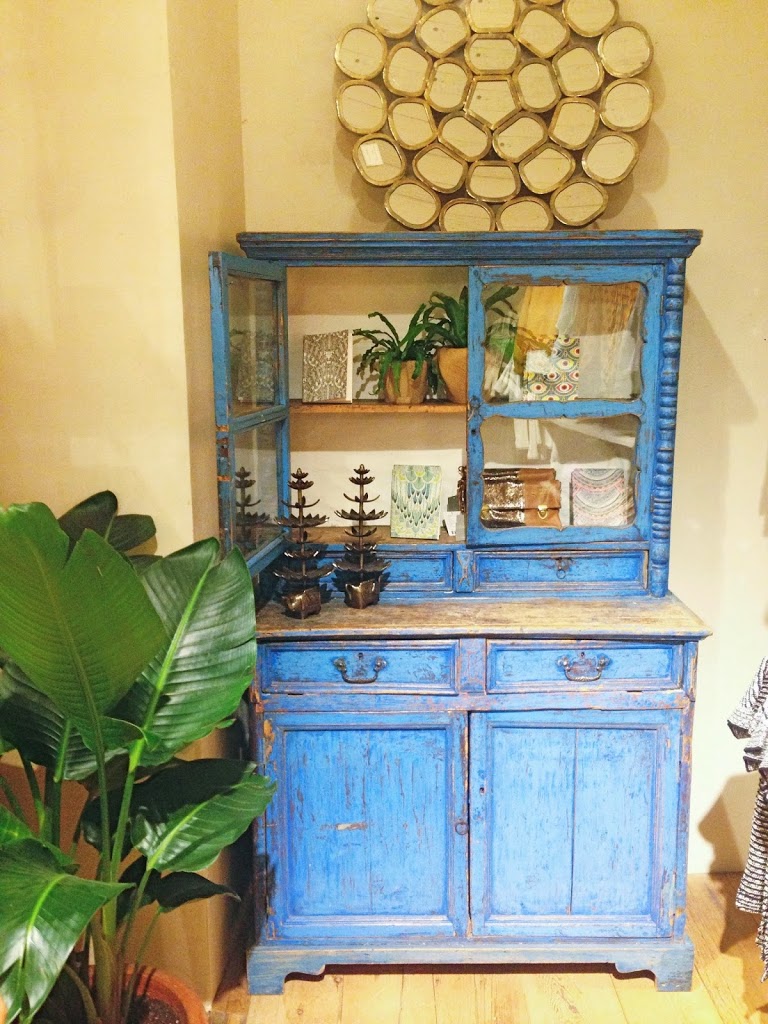 Then right as we were about to leave the mall, I checked my Twitter feed to discover that I had won an ANNIE SLOAN GIVEAWAY!! I was SO excited that I literally did a ‘superstar’ pose in the mall while yelling, “I WON!” I looked ridiculous and I didn’t even care. I posed with a can of Chalk Paint but I actually won Annie Sloan’s new tapered wax brush, which I’m SO excited to use! 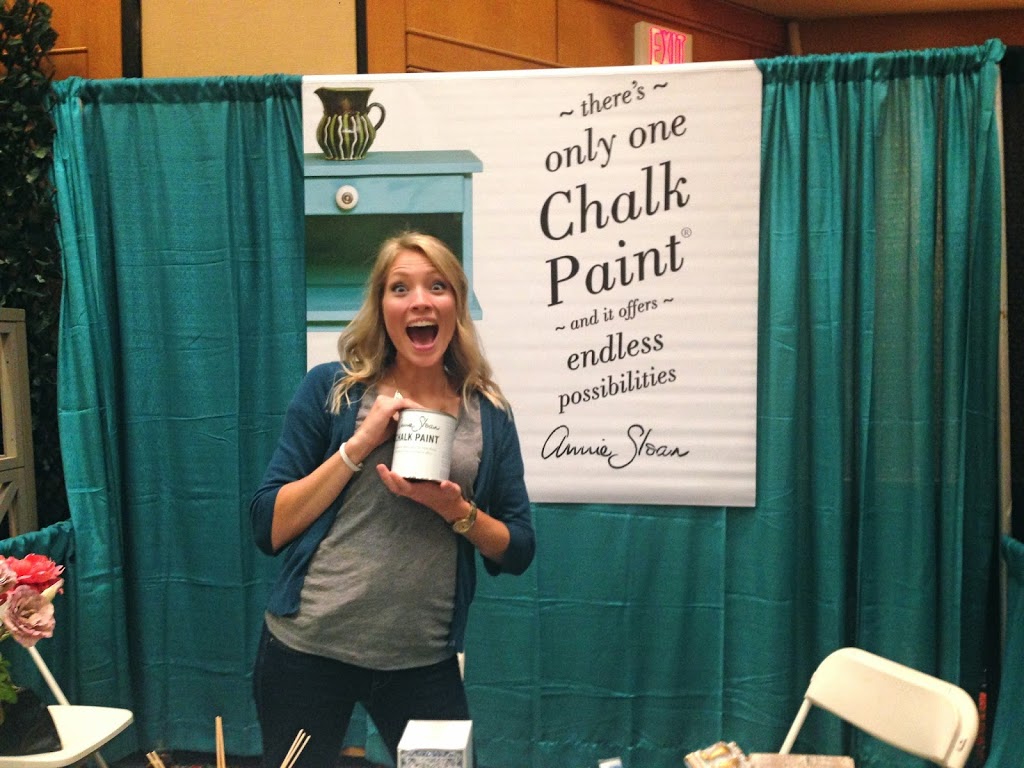 That afternoon I took Beth from Unskinny Boppy‘s class on using Adobe Lightroom to edit photos… let me tell you… that class was life changing. So affordable and I can’t believe how much it can improve my photos and save me time! Downloading it is on my to-do list THIS WEEK!
Once classes were over for the day, and before the RYOBI party started, I went to dinner with this amazing group! Left to right: Susan from Between Naps of the Front Porch, Lucy from Craftberry Bush, Beth from Unskinny Boppy, Katie from BowerPower, and Dusty from All Things G&D. 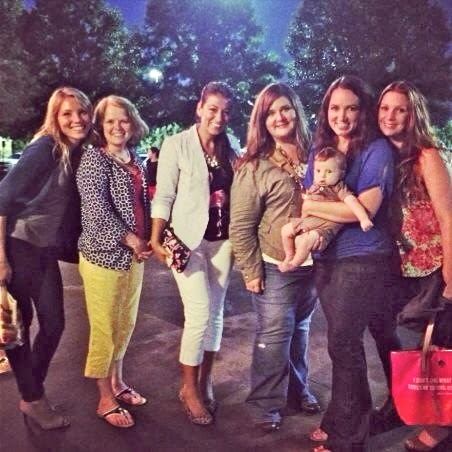 After waiting at Cheesecake factory for nearly an hour, I ended up stealing our table (which worked out haha) and we chatted about life, blogging, and I was informed that there is an entire world of blog haters! Like for real! My mind was blown. Some people spend hours a day devoting entire websites on being negative and hating on big-name blogs. Can you imagine how much good could be done in the world if we spent more time building each other up and seeing the positive instead of self-righteously tearing each other down?!?
The golden rule, people. When in doubt, the golden rule.
So then we went to the Ryobi party, took some photobooth pics (including this one below) and ended the evening/early morning with Beth, Lucy, Danielle, and a bottle of Champagne. We really didn’t want everything to end, and to say goodbye. So we didn’t. We said see ya later 😉

By now you recognize the gals in this pic, except the babe on the far left… that is Stephanie with Ryobi. We became fast friends with her because she is pretty awesome and holy smokes does she know her way around power tools!

Lucy gave an original watercolor painting of a feather attached to her business card and on the back was this: 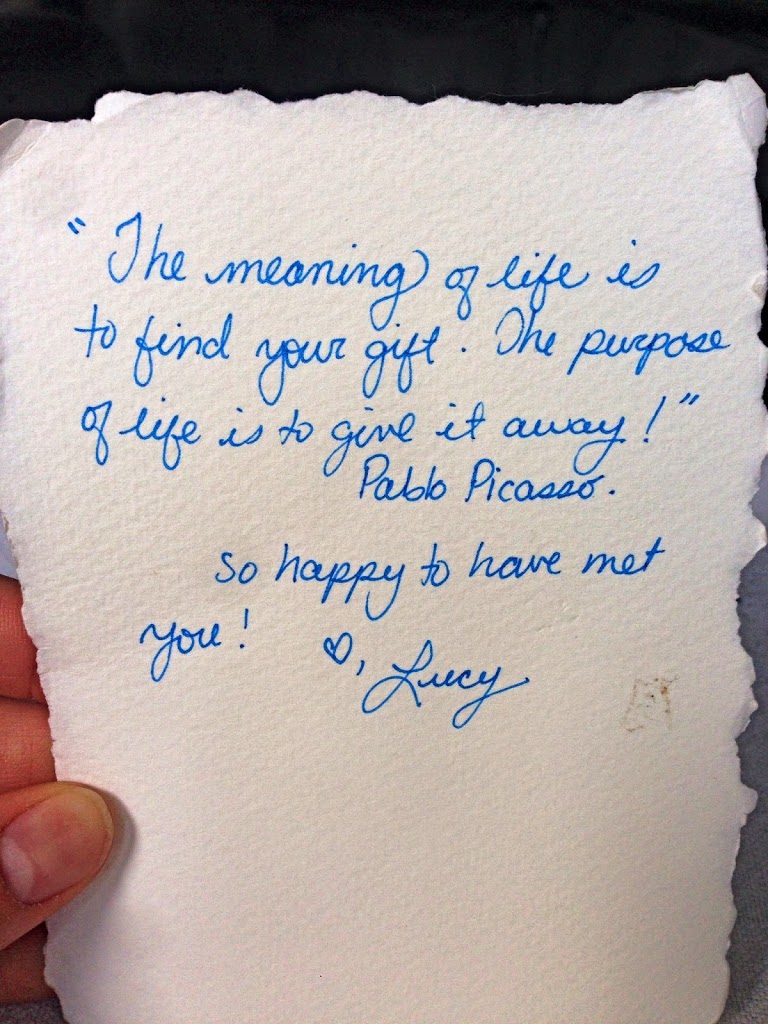 Isn’t that beautiful? Of course there are bloggers/colleagues/people in general who go about building their business or career caring primarily for building themselves up. Who care more about what can give them a leg up in the game, than about being kind and generous. But at the end of this life, we won’t take prestige, money or even power with us. The number of followers or sponsors we have won’t matter. I believe relationships, friendships, how we treat others are far more enriching and have a greater reward in this life and in the next.
When I see this feather I think about the time and care Lucy spent into creating each one, unique, beautiful– a piece of her. And the fact she was willing to give it away to me– someone she didn’t even really know a week ago… it is just symbolic of the spirit of generosity and camaraderie that I think the Haven Conference represents. 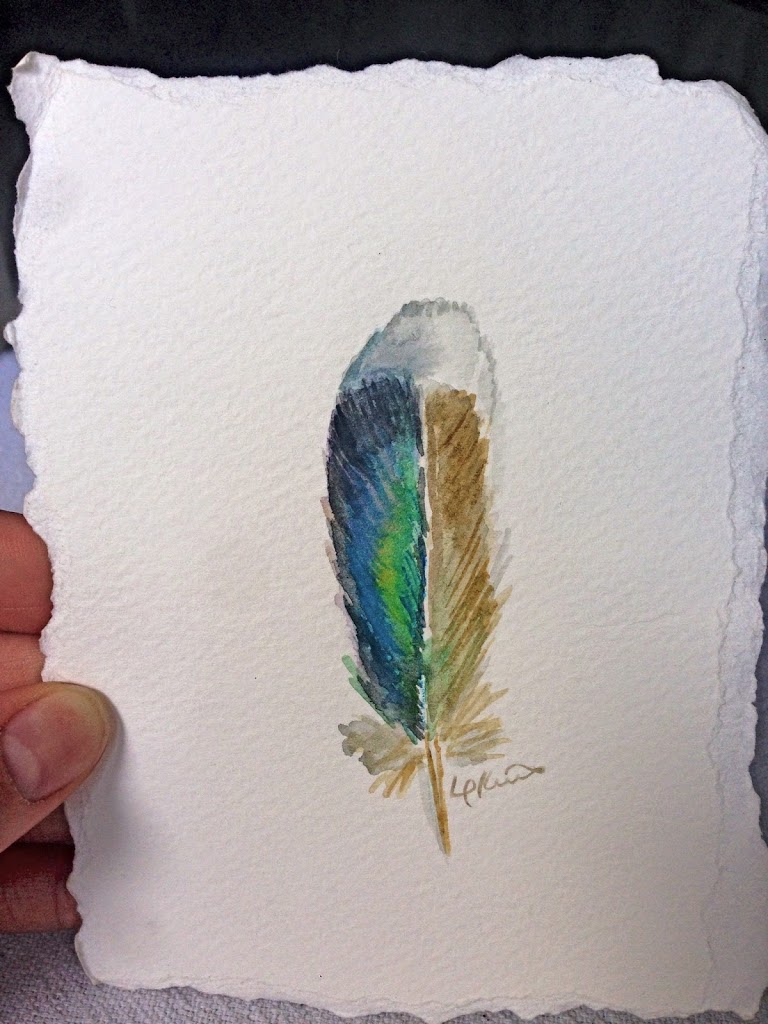 Can’t wait until next year, but until then I’m going to focus on using my gift to help, build, and bless others.