I have had these Pfaltzgraff stoneware dishes for a couple years now and while I love the texture they have, I HATE the gray marks they all have developed from our flatware. Spoons marks on cereal bowls, and inside mugs from stirring up chocolate milk, knife marks up the plates…. you get the idea! 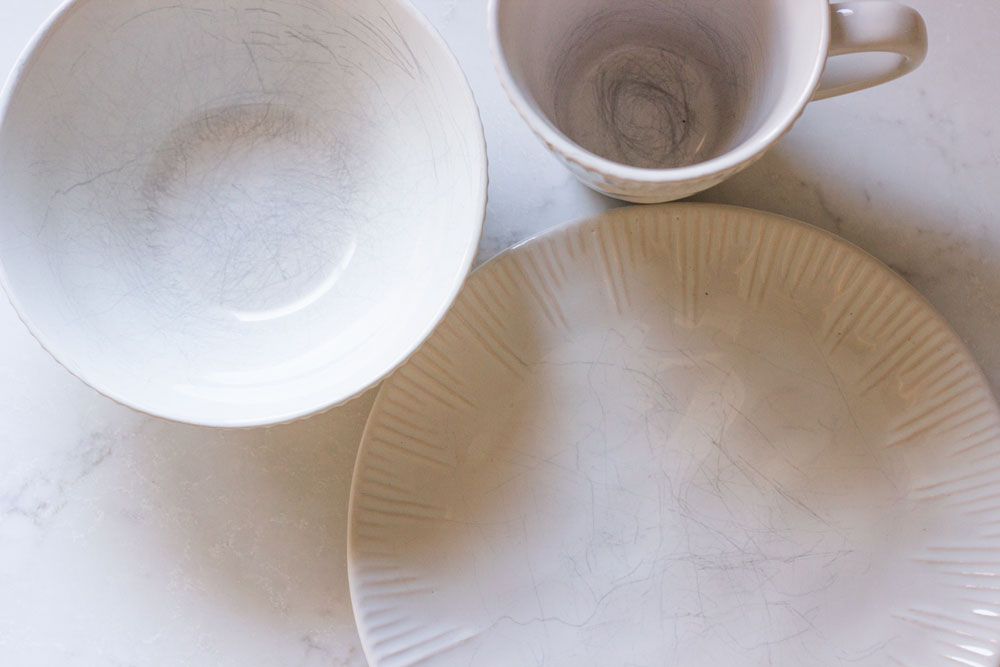 So, a couple weeks ago I got onto my IG stories and asked you all what you suggested to take the gray marks out of dishes. I got nearly 200 replies! I decided to try several different suggestions and see what worked and what didn’t.

Here is the complete list of suggestions from people who tried them and had success (some affiliate links used):

Here is my arsenal of cleaning products that I found at the grocery store and tested out to remove the gray marks on my dishes: 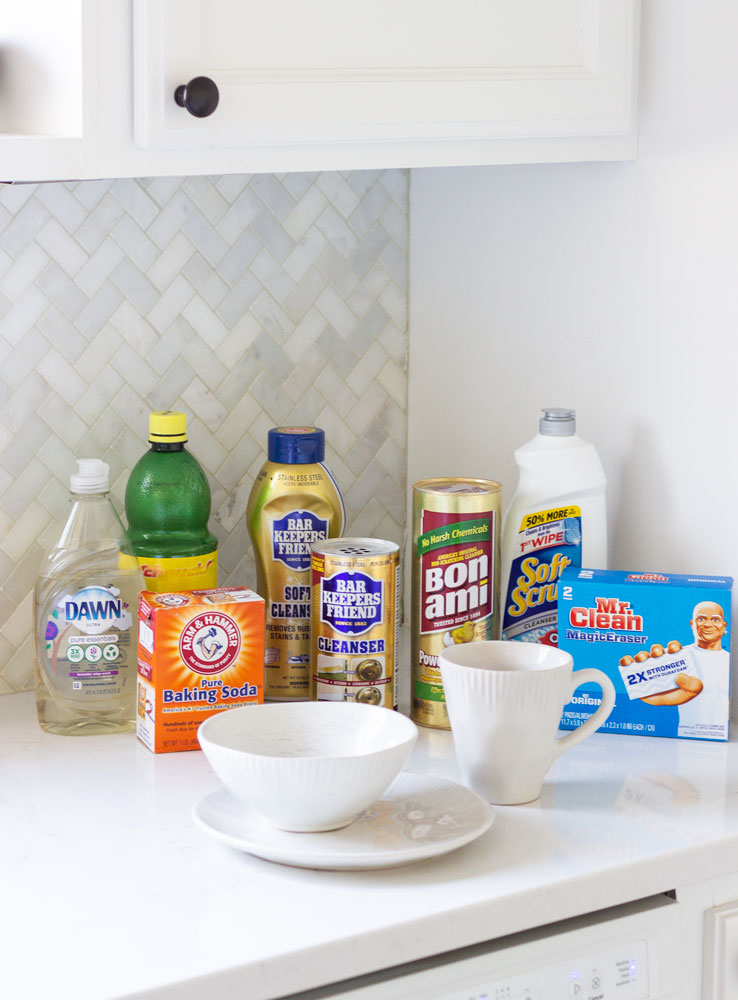 Even though Comet and bleach were suggested, I felt Comet was too similar to Bar Keeper’s Friend so didn’t feel it was necessary. I also felt bleach didn’t have anything abrasive in it, so decided to skip that one. If all else failed, I could always go back and buy those two and try them but luckily I didn’t need to!

For all of the products, I used this Sterling’s scrubber instead of the standard green scrubby sponge to clean the dishes. It has a sponge on the inside and that scrubby material (that lasts longer) on both sides. I’m sure you could use a regular cleaning scrubber and it would work just fine though!

I heard two recommendations to create a baking soda paste, one where I mixed dish soap with baking soda and another to mix lemon juice with baking soda. I tried both and scrubbed hard for a couple minutes. The marks lightened, but they were still visible.

The powder form requires the dish to be damp before you sprinkle it on, whereas the soft cleanser (liquid) doesn’t but does need to sit on the surface for 1 minute before scrubbing. Both don’t have a list of ingredients, so I don’t know how toxic they are. However, after scrubbing vigorously for a couple minutes, both had equally good results! All the marks came out! On the plate I tested them out on, there were a few small knife marks that didn’t come 100% out but lightened significantly, so I still considered it a win. 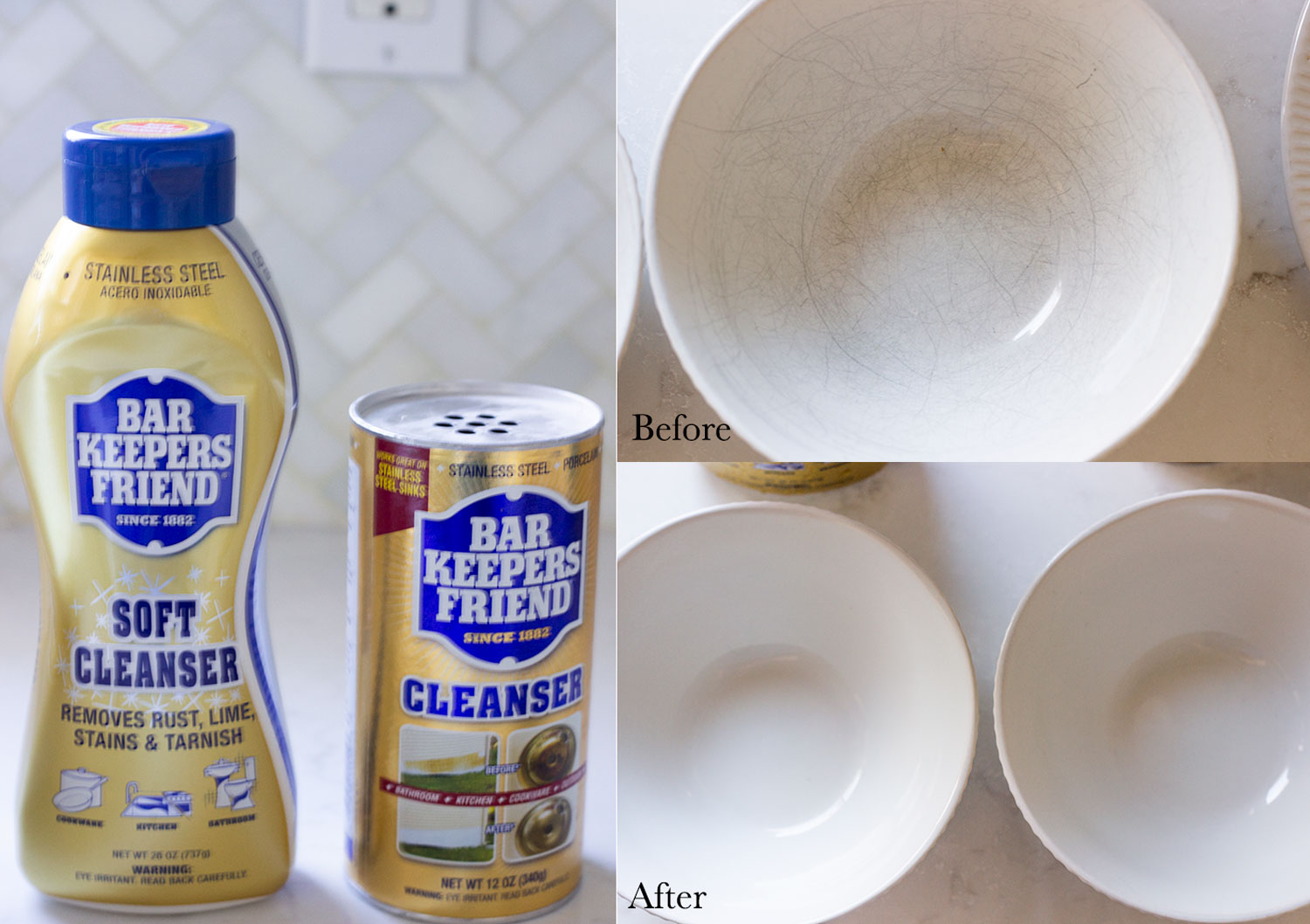 This is what they looked like sitting in the bowl. I ended up applying the products twice, because after the first scrub and rinse, I noticed a few spots I missed.

Because I don’t know how natural or toxic Bar Keeper’s Friend is, I used gloves to clean the dishes. 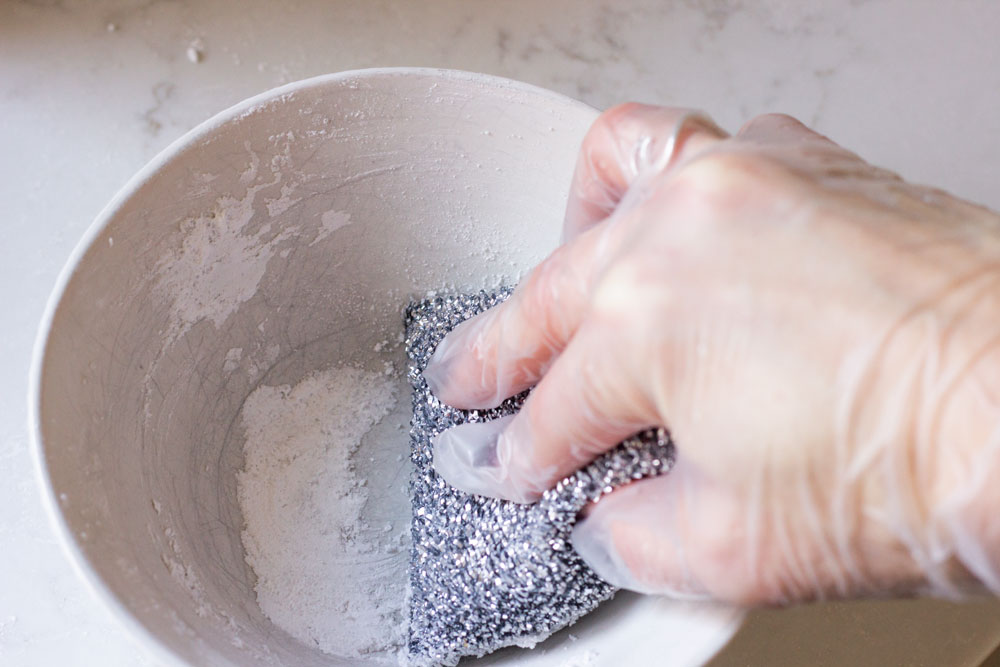 Look how clean it got my bowl! 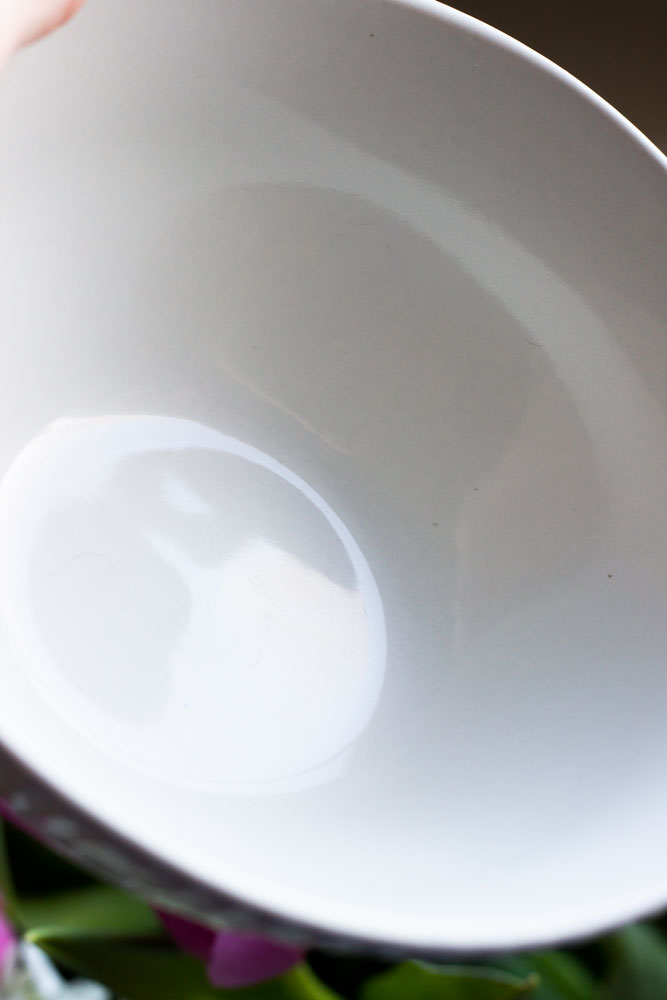 This powder dispensed and was used similar to Bar Keeper’s Friend (on damp surface).  The results were fantastic– everything came out! However, to me what bumps this one above the rest was the fact they listed the ingredients on the back– it contains no chemicals and is completely natural! I also noticed it didn’t form a fly-away dust as much as Bar Keeper’s Friend… the powder ingredients seems to be a bit heavier so it ‘stays put’ better. 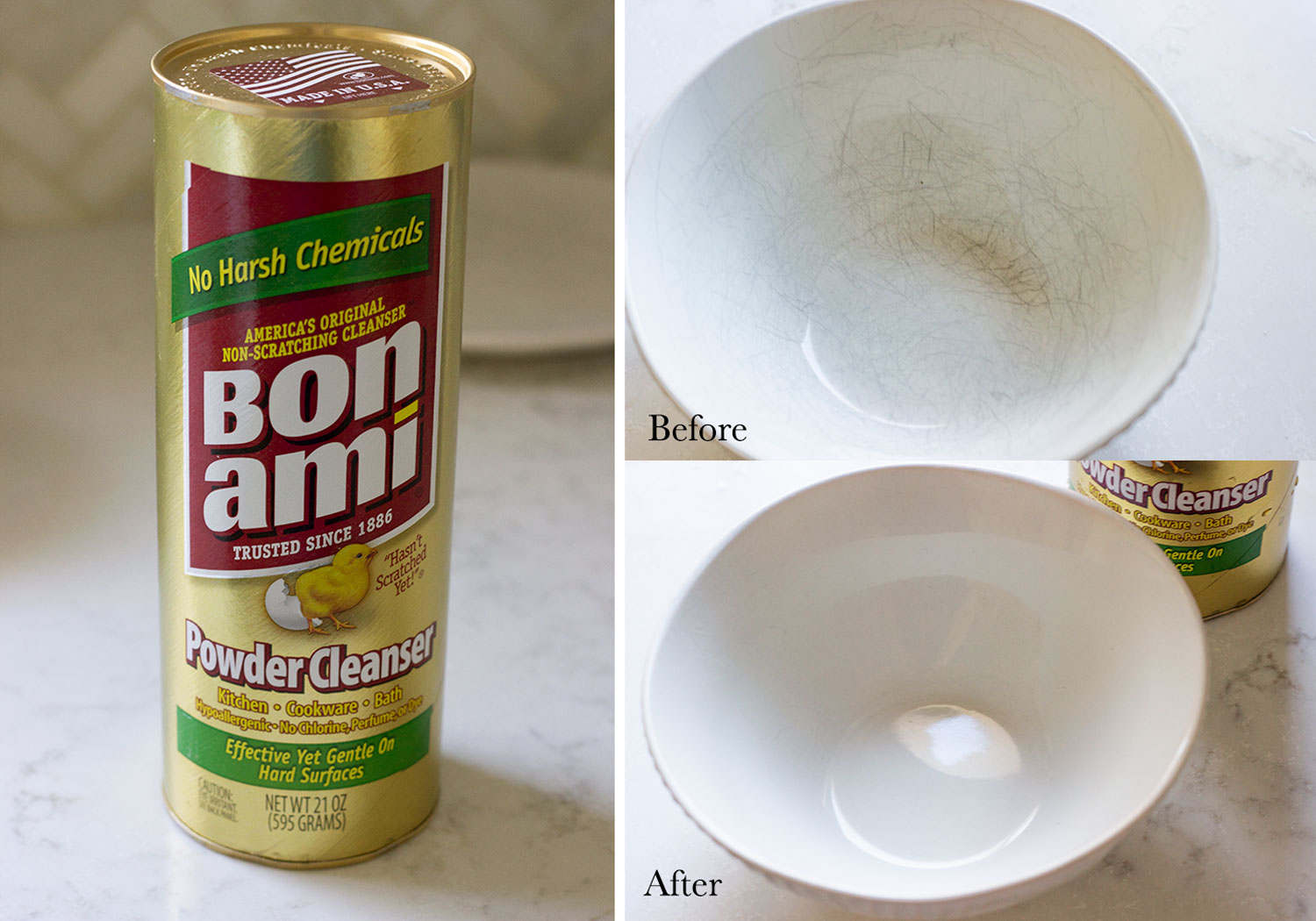 Many forms of Soft Scrub have bleach in it, but I find the bleach fumes to be quite strong, so I opted for the one with Oxi in it. It doesn’t require the product to sit on the surface for any specified amount of time, and it did an okay job. The marks lightened more than the baking soda paste, but some of the darker marks on the sides I couldn’t get off. 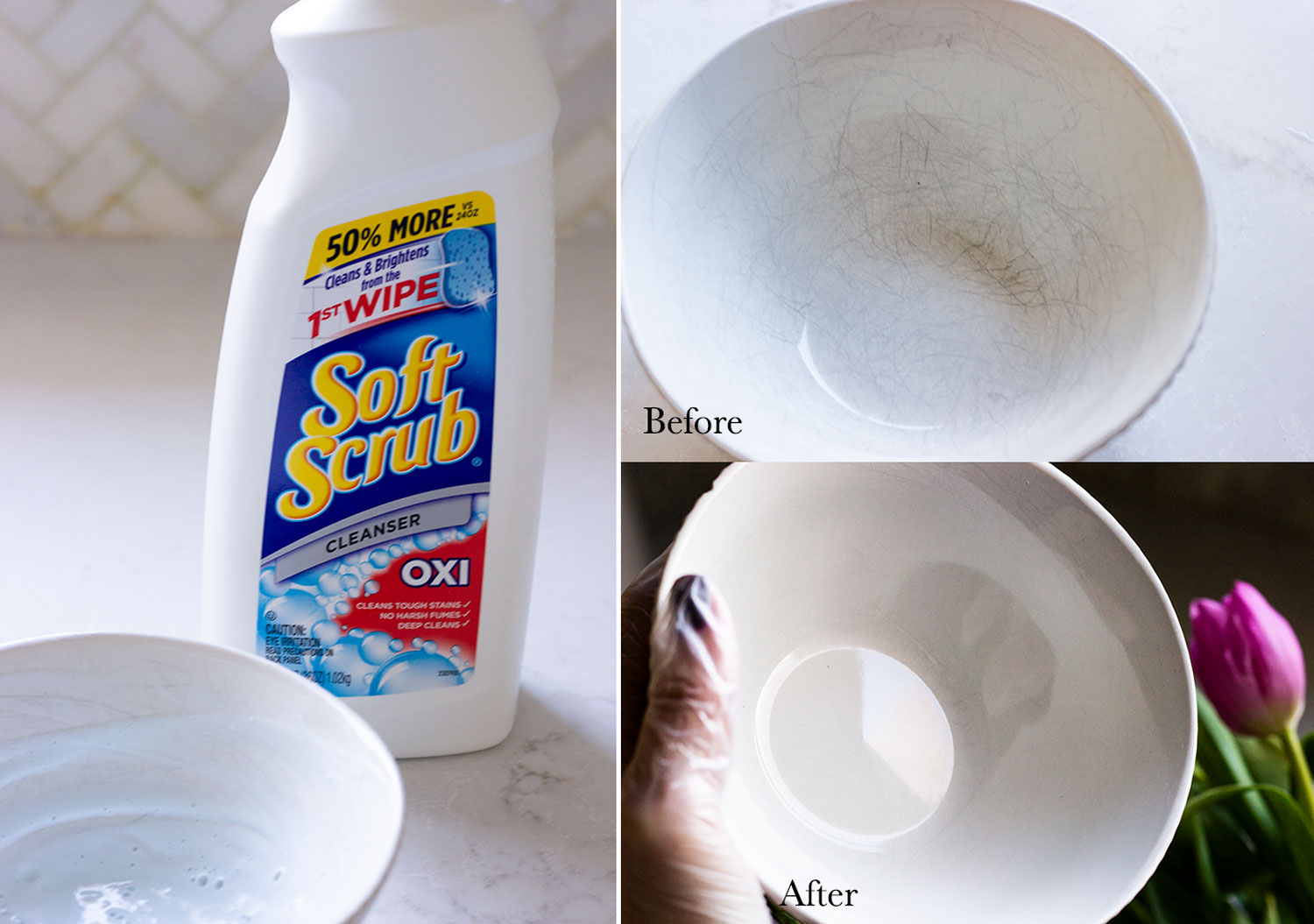 Here is a close- up of the marks that were left on the sides after using the Soft Scrub and scrubbing hard for a couple minutes. 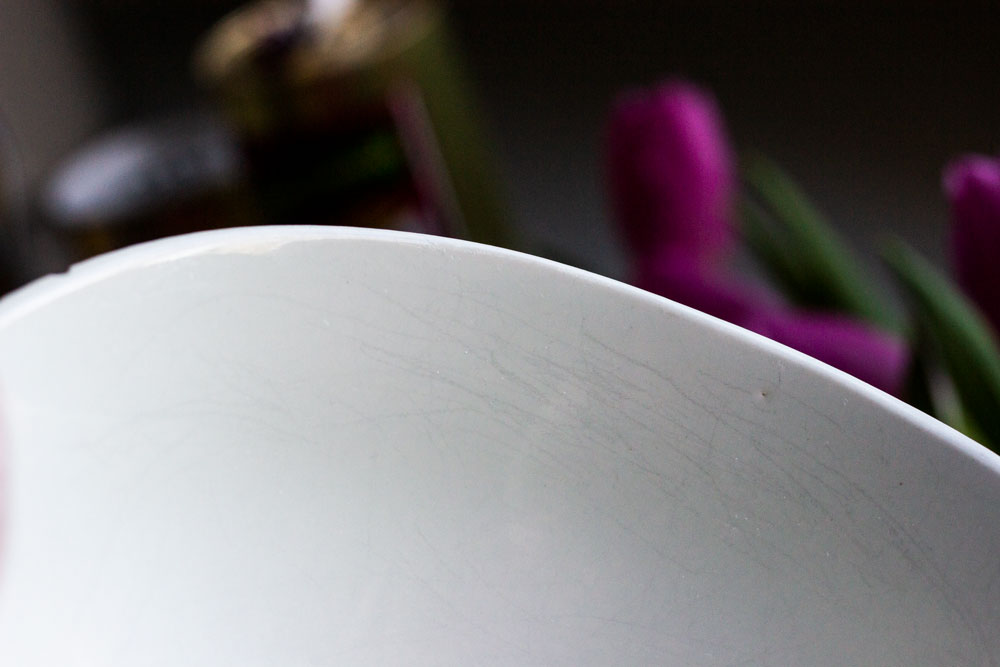 I had tried a Magic Eraser before without great success, but so many suggested it, I decided to give it a go again. Same result as I had before– the marks lightened but didn’t take them out. I would say this was about as effective as the baking soda paste.

And the winners are… 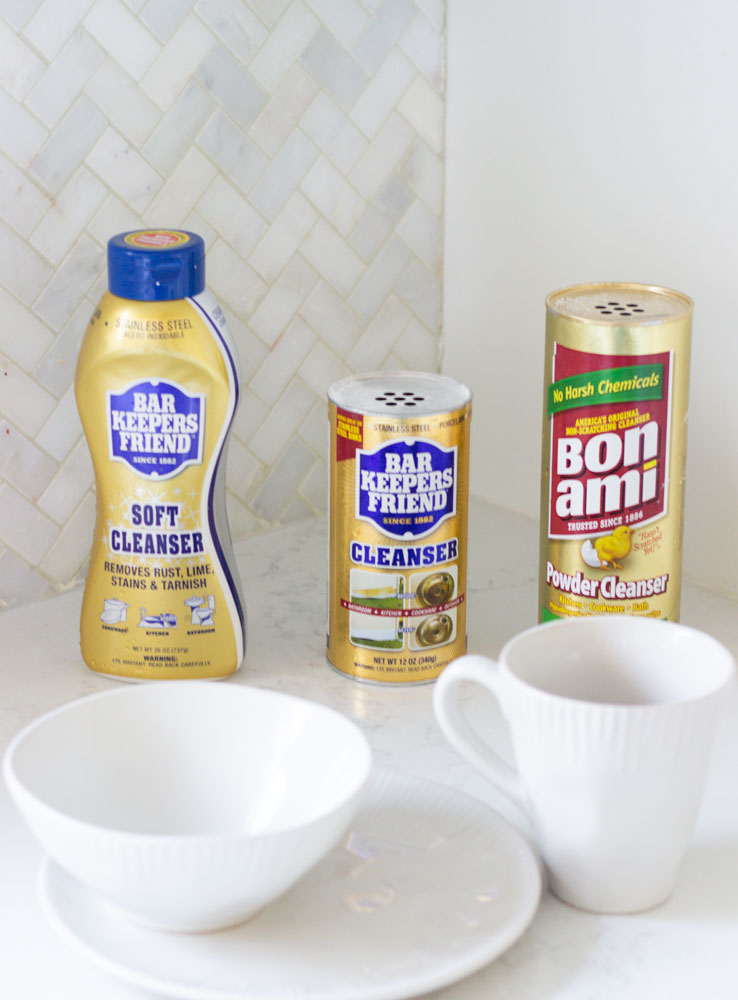 All three of these products removed or nearly removed all the marks on my dishes after a couple minutes of scrubbing hard with a my scrubbing sponge. 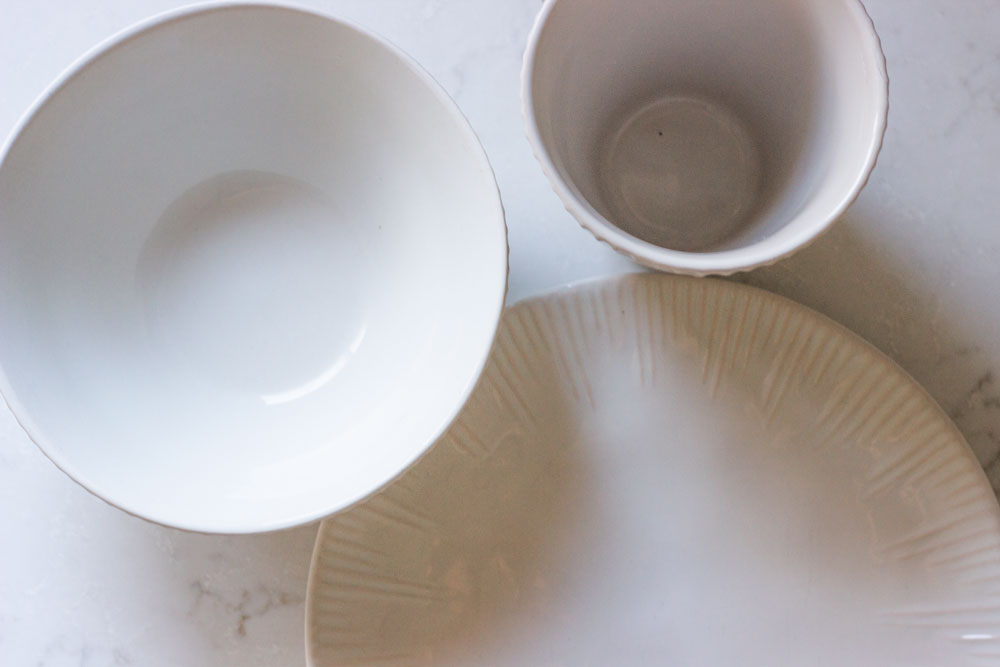 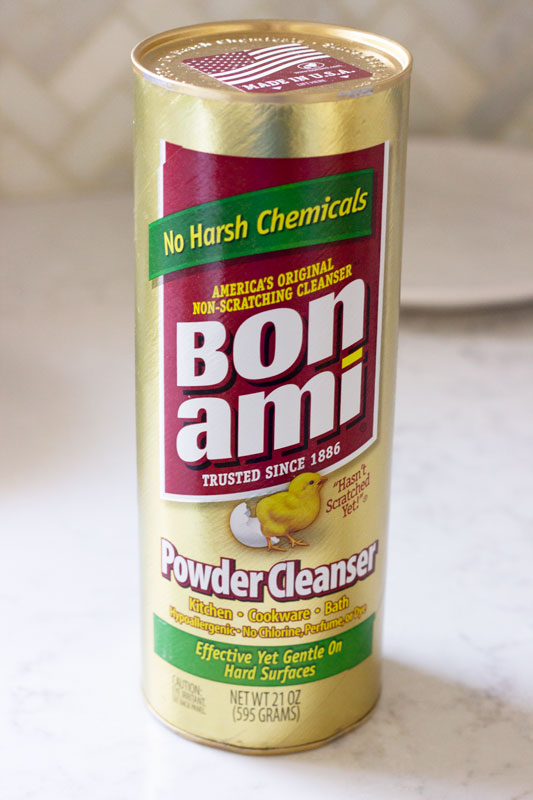 Out of all of them, I would definitely buy Bon Ami again, even though it was only suggested by 2 people! I loved that it was just as effective as Bar Keeper’s Friend (which had dozens and dozens of suggestions) and the transparency of the ingredient list. If you can use natural, safe products that work just as well, why not?  Downside is I only found it at Target but not any other local grocery store. It is also available on Amazon.

While I’m glad I found a solution to clean the marks, I know this is not a permanent fix and I will have to repeat the cleansing process the next time I see more gray marks. For that reason, I will probably be phasing these dishes out eventually and buying more of the white World Market dishes that I already have (they are on sale now too!). I spoke with a few people that have had white World Market dishes for 10+ years and they still look like new!