Today marks my first blog post after nearly 8 weeks of hiatus. It’s the longest blogging break I’ve taken in at least 3 years and while I felt a bit guilty, I was so busy with lots of things going on in my life that I knew it was what I needed to do and my what my family deserved. Let me spill the details…

First, the Friday after I posted my Farmhouse Night Stand in January, my husband, Bruno, had surgery on his torn ACL. He had injured his knee playing soccer with the kids about 1 1/2 years ago but it was shortly after he had started his MBA. He knew he couldn’t have the necessary surgery while working and going to school, so we waited. He dealt with the pain and swelling until it was manageable, and was just careful for over a year. Well, he finished his MBA *jumping-up-and-down-exuberantly*  just before the New Year so we scheduled the appointments. They replaced his torn ACL with a patellar tendon graft and he will hopefully be back to playing in the back yard with the kids by June.

If any of you are familiar with knee surgery you know how slooooowwww the recovery is. Picture your husband with the ‘man-cold’. Now take away the coughing or sneezing or the legit contagion, and you have an idea of how things were in our house for 4 WEEKS! Poor guy. He was in a lot of pain… but we managed through it and he is just now starting to walk around without crutches 😉

At the end of February, a crew from Meredith Corp came out to shoot my home for a BHG Special Publication, 100 Ideas Flea Market Style! They shot the entire upstairs of my home for the summer issue coming out June 27th. I was contacted last November and we set up for one of their stylists (who happens to live local to me) to come to my house and make a photo order in January (just before surgery). Basically that means she came over and took some quick pictures with her phone and then with those, decided with their team what needed to be changed or moved around, and what props they would need to buy. The actual shoot would happen a month later, February 22-23.

There was a long list of things I wanted to do before the shoot, which quickly narrowed down to a short list of high-priority items once I realized I how limited my extra time was after the surgery. I had to swag my dining room chandelier to centered over the table (which required re-wiring some parts), replacing the mirror sliding doors in my bedroom with my DIY craftsman style bi-fold doors, building a little cabinet door for a spot in my kitchen that didn’t have one since my kitchen makeover over a year ago, re-paint my bathroom and bedroom shiplap walls, and of course deep clean and find some fresh artwork for a few spots in my home.

Here is a camera-phone-video I did to document how my home was looking just before Jessica (the stylist) came over to do the photo order. It looks quite a bit different now but gives you an idea of what we started with.

Fast forward to about month later… here is some pictures I captured on day 2 of the shoot. This is the crew. 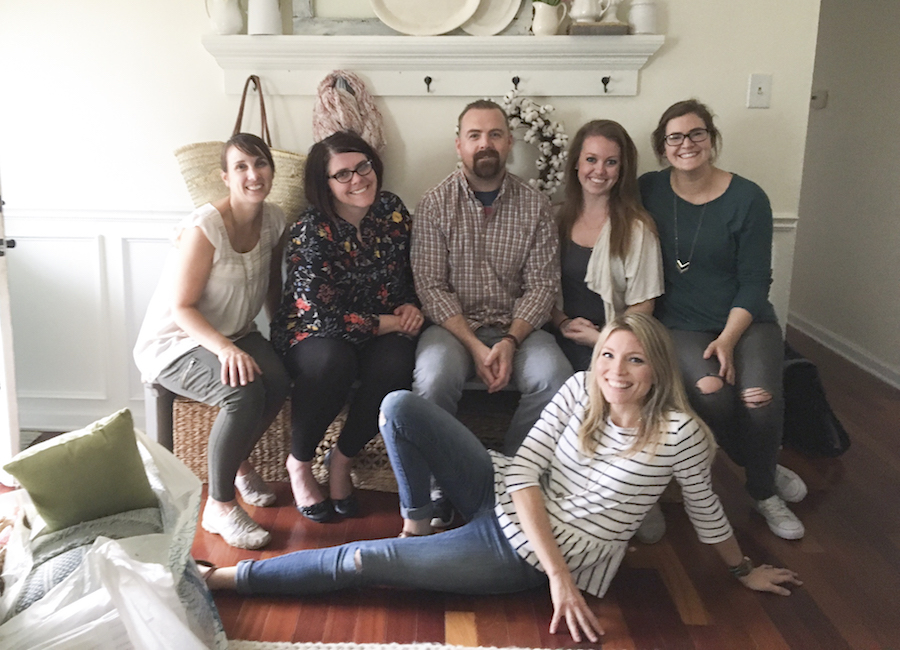 Left to right: Jessica (the stylist who lives close to me), Stephanie (art director), Jason (photographer), Brittany (graphic designer- learning to do what Jessica and Stephanie do), and Rachel (photographer’s assistant). Then there is me, sprawled on the floor, with an awkward hand pose. I’m not sure why I thought this was a good position hahaha!

I was so shocked at the quantity of flowers and pillows that were brought in– but it DID make for some beautiful messes! 😉 Just look at how cute Stephanie is! 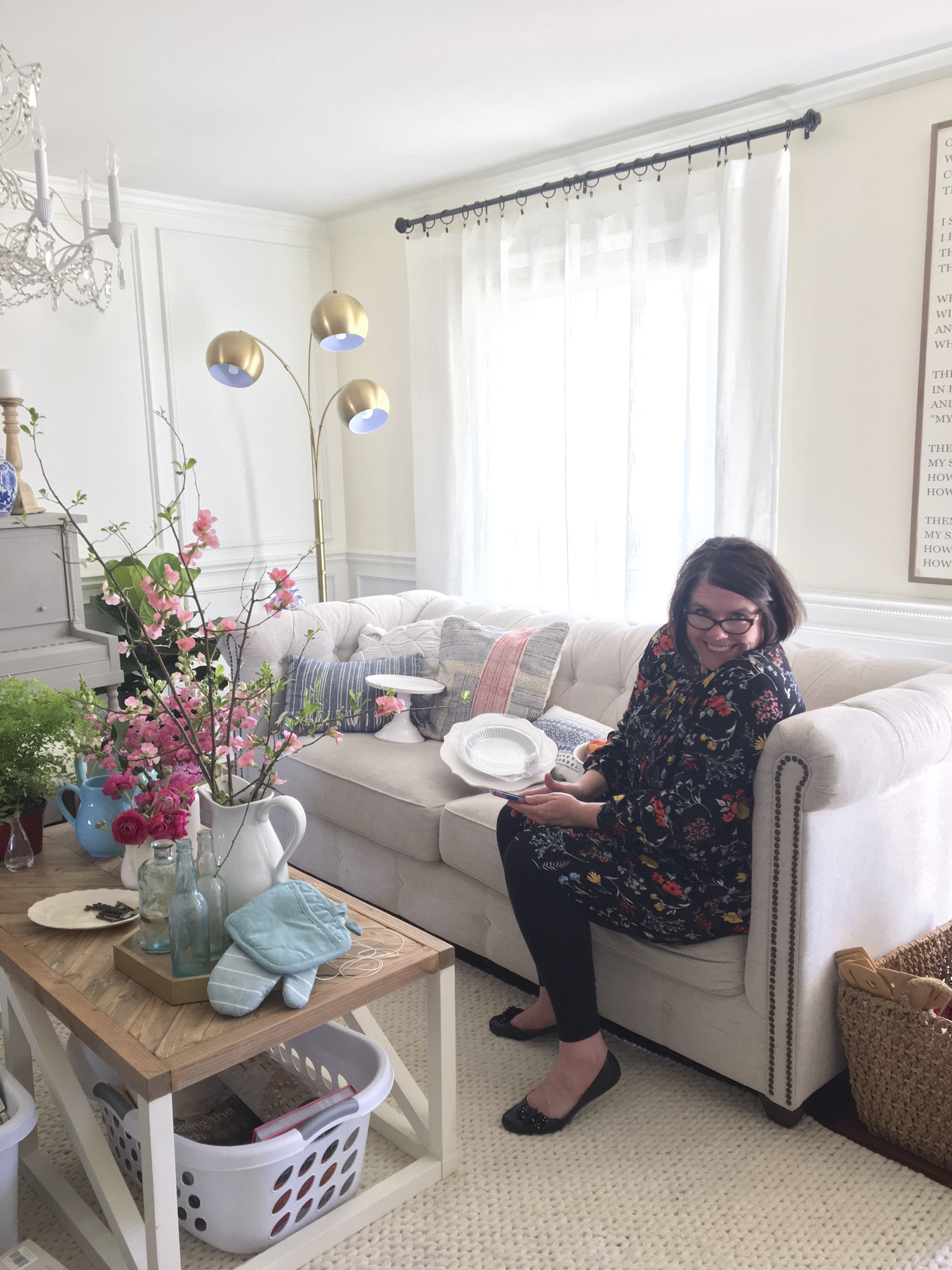 Here are Jason and Jessica checkin out the shots of the kitchen.

From the whole shoot, the thing that surprised me the most was how much the minute details matter. Angles at which two objects meet, the heights of objects… staged but not too perfect, hints and nuances of furniture placement… they were basic concepts that I was aware of, but my level of understanding and is at best, amateur and theirs is super major pro. I mean, obviously. They work for a national magazine! haha

There were several cover tries that were done..which means Jessica got to buy a million pillows and throws and flowers to use because basically they will do anything for a cover try. Just FYI, they took maybe 6 cover tries at my house, but they have at least 20 images from other people’s homes to choose from and I won’t know about it until just before the magazine is released. Here is Jessica working her magic on styling this living room shot. Fun fact… Jessica is from Australia but moved here to go to college, knowing she wanted to work for Meredith. She interned with them, then got hired full-time for awhile, then for the past several years has been free-lancing for them as a contributing editor and stylist. You know that new I Did It magazine? That was one of her most recent big projects. 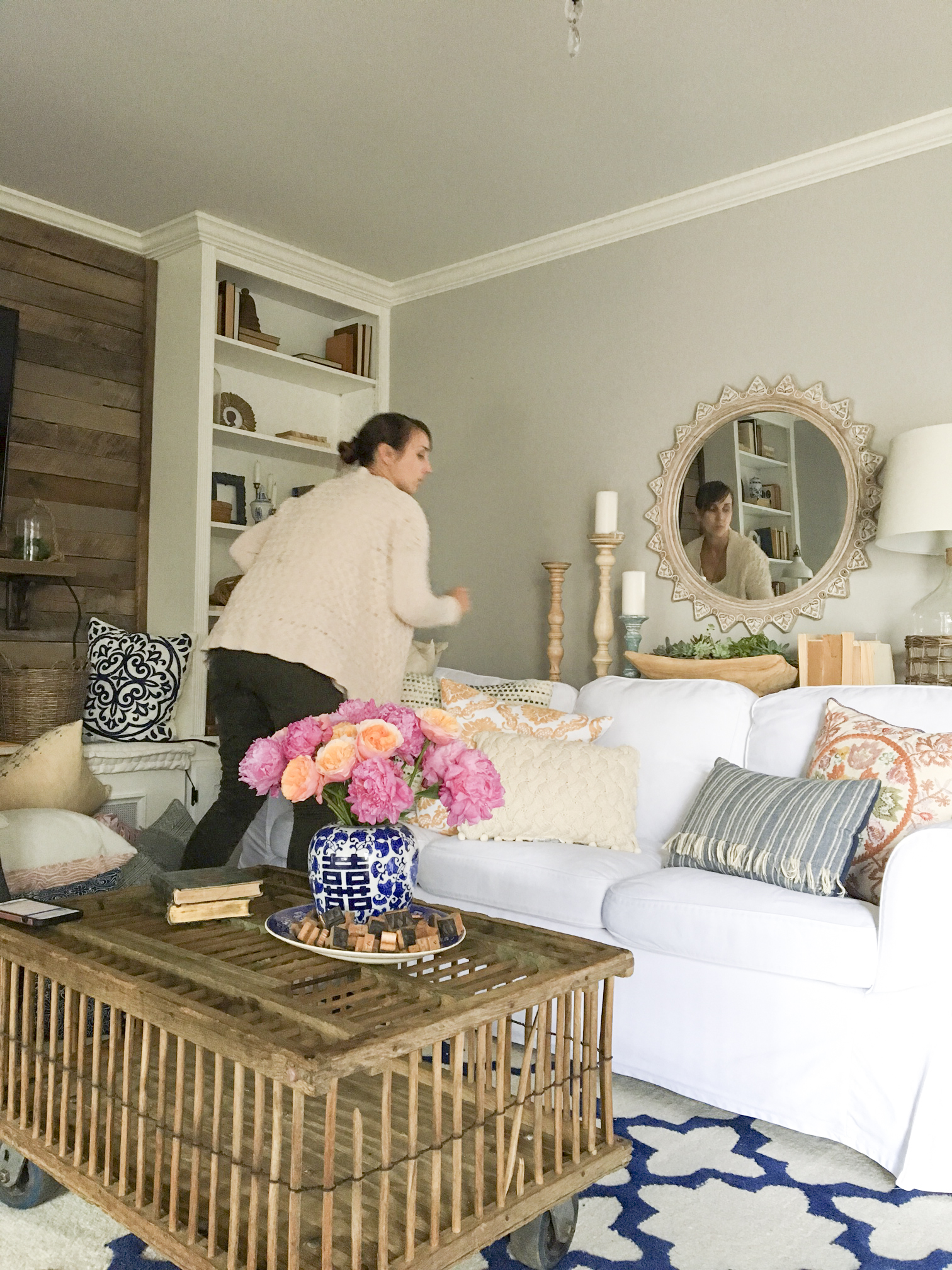 On the other side of the room… 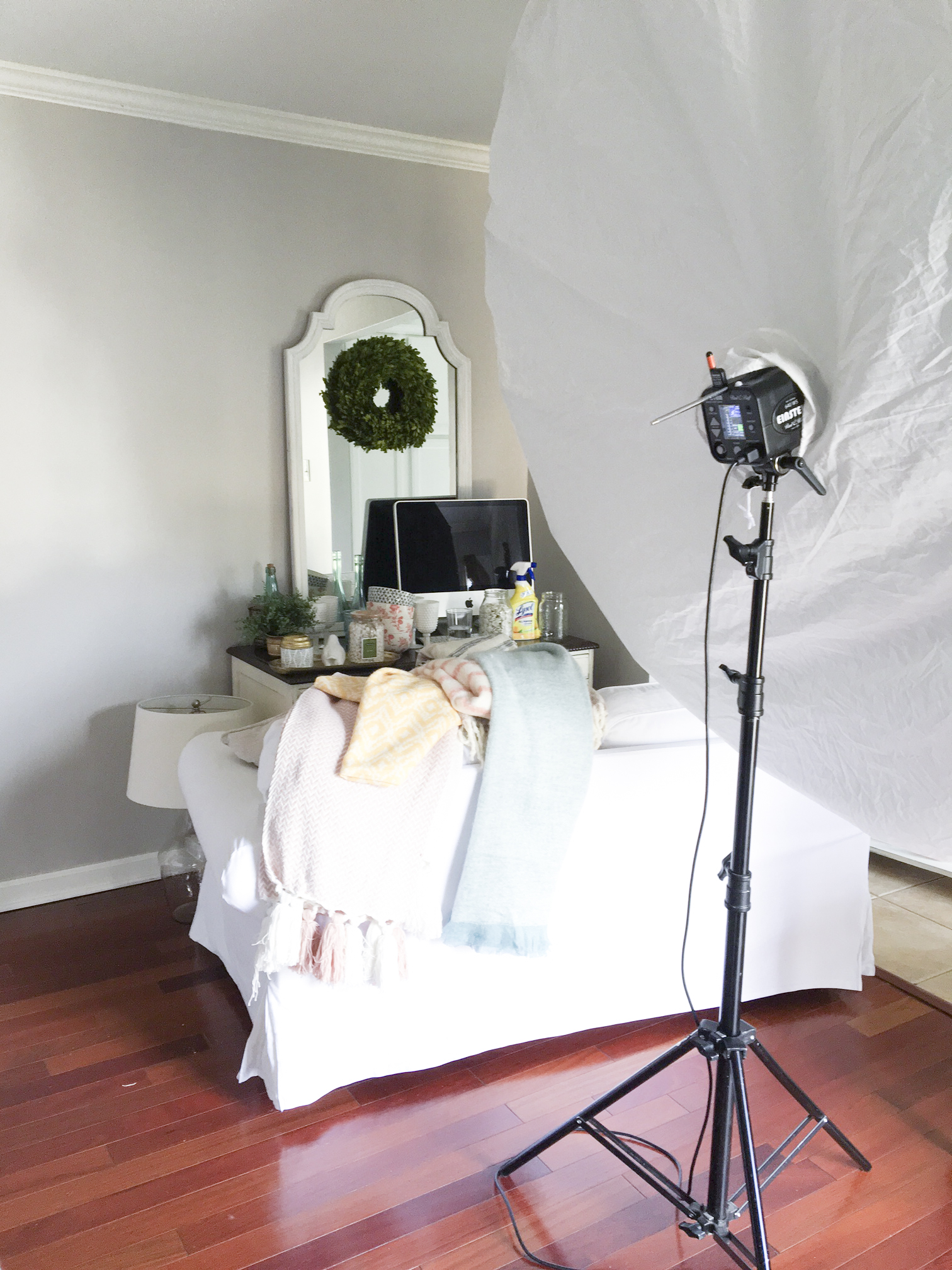 And here is where the camera was for that living room shot: 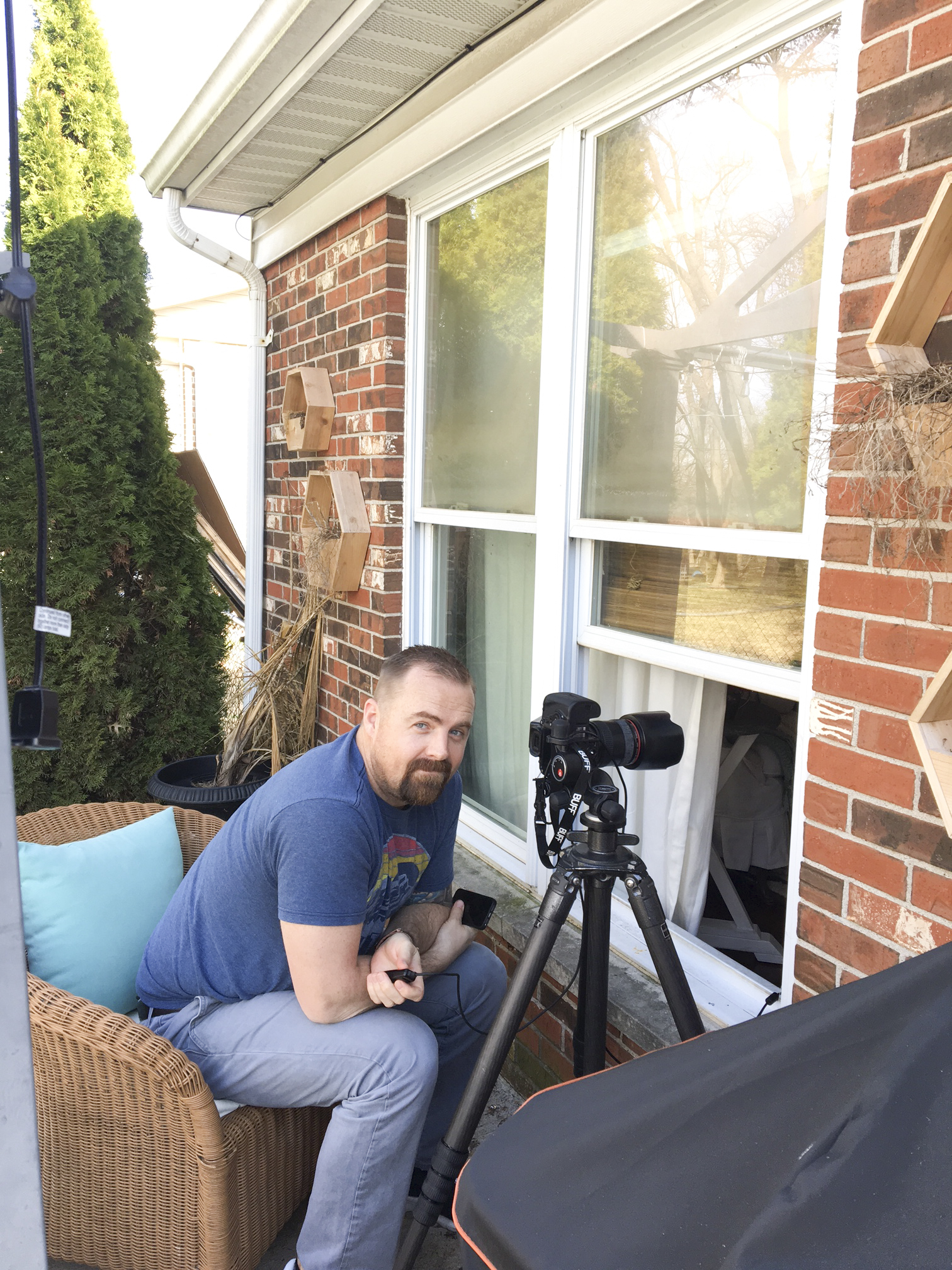 Jason is such a cool guy. Besides being super patient and never complaining about how long things would take to get the styling just right, he has one of the coolest jobs ever. He graduated from the Art Institute of Pittsburgh and has been one of the 5 full-time photographers working at the Meredith headquarters in Des Moines for the past several years. The rest of the photographers used for home shoots are freelance contracted in various cities.  He also taught me a few things about how to use lights, gel films to counteract certain color casts in a room, and the best positions to photograph areas in my home.

Here is where extras were shoved… And despite the half-drank Izze, trash, and random pen… I just love the look of this mess! 🙂 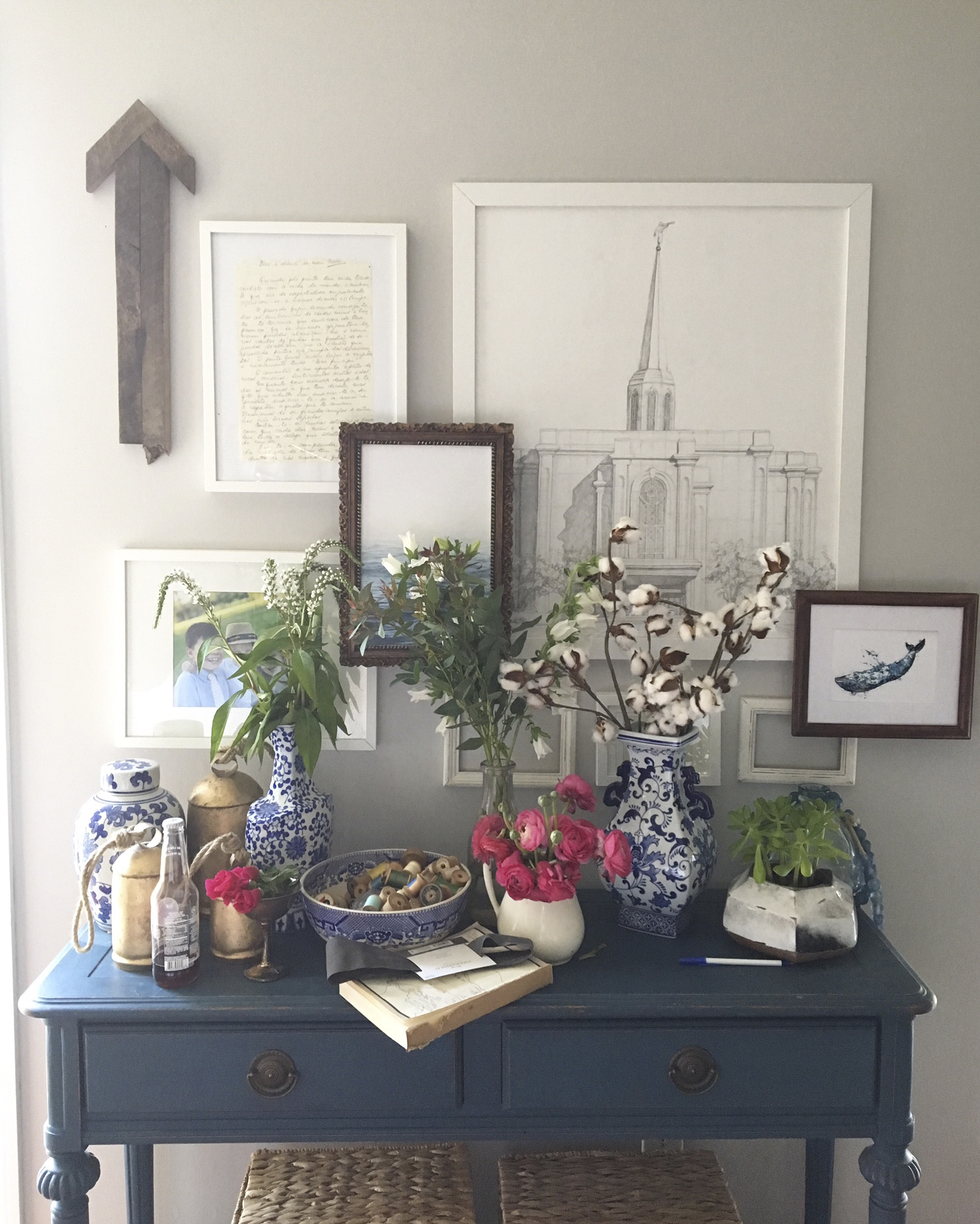 When we wrapped up on day 2, things started getting sorted and put back, but our sofa became the landing spot for some of the pillows lying around. I’m not exaggerating when I say we had about 4 or 5 times this many pillows to choose from. All of it got returned though. 🙂 Except for ones that I already owned, obviously. I told Brittany to pose in front because A) she’s cute and B) we were joking a lot about throw pillows because apparently her husband wants exactly zero pillows on their couch in their new house. We all thought that was hilarious and felt it was necessary to snap this pic with the appropriate number of pillows for a couch. 😉 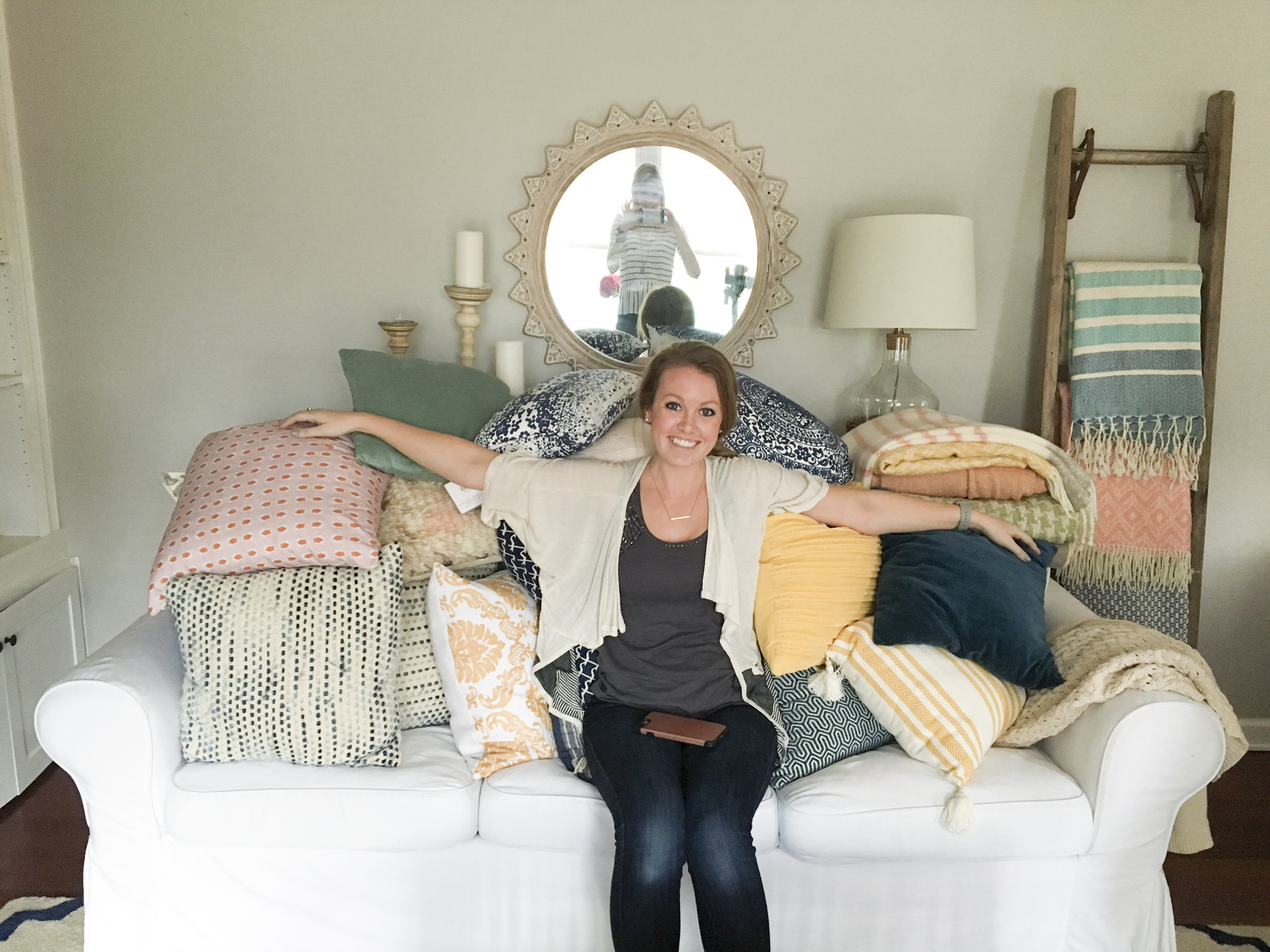 I’m sure you would all love to see the ‘after’ tour but you all will have to wait until the magazine is released! As I mentioned before, it comes out June 27th. It was fun seeing my home styled and tweaked in a fresh and new way, while at the same time still feeling like ‘my home’.

So… while all of this fun stuff was happening upstairs… all 3 of my children were terribly ill and confined to our basement with my crippled husband taking care of them. We took them into see their Dr the day before the crew came and got everyone on Tamiflu, but that medicine made my daughter, Kaila, even more sick to her stomach. She got worse and worse and on Friday morning (everyone upstairs left on Thursday night), I had to take her to the ER. Turns out she had pneumonia, the flu, and because she has viral-induced asthma, it was a triple combination that required a night’s stay in the hospital. As I was walking out the door to the ER that morning, we got word that Bruno’s beloved grandma had passed away. It was devastating news because we recently purchased tickets for our family to go to Brazil in May to see her one last time (she didn’t have a serious illness and her death was unexpected, but she was old and her health hasn’t been great the past couple years). That was a hard weekend, but we were sustained by prayers.

By Wednesday of the following week, Kaila was healthy enough to go back to school and it was just in time for my brother’s arrival from Alaska with his family. We crammed as much as we could into the 3 days they were here. We went to the Zoo, Lone Elk Park (a drive through park where you can see Elk and Bison up close), ate some St Louis BBQ at Sugarfire Smokehouse, visited the City Museum, went bowling, and then we spent time hanging out in our back yard, throwing around the football and picnicking.

That brings us to this week where I have been cleaning and changing things around for my Spring Home Tour next Wednesday! I’m finally back to working and blogging and it feels good. I know this post is unusually personal but I felt I owed an explanation as to where I’ve been.

Here’s a sneak peek of what’s to come next week: 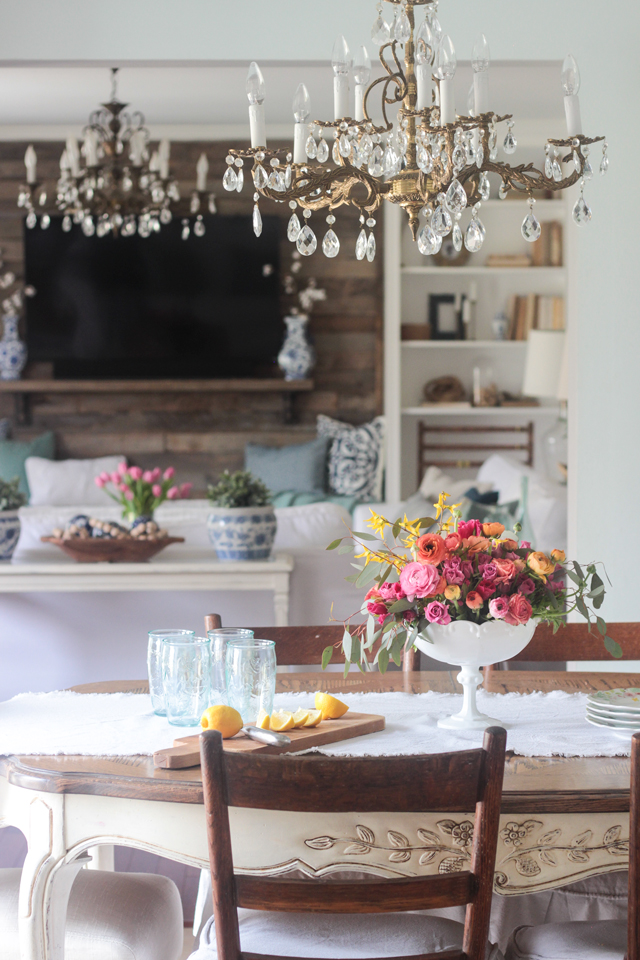 One last thing… as I mentioned, our family will be going to Brazil for 3 weeks in the month of May. We will be visiting Rio de Janeiro, Brasilia, Caldas Novas, Goiania, Curitiba, and Sao Paulo. We have family in most of those places so that is our main reason for this huge trip but I WILL be blogging about some of my adventures. I’m even going to try and do a couple small DIYs (just to see if I can)! 🙂

Thank you for your patience and how understanding you all have been since I’ve started posting more on social media this week. I missed interacting with you all and I’m excited to get life back to normal. And hopefully I won’t need to take another hiatus like for a long time. 😉